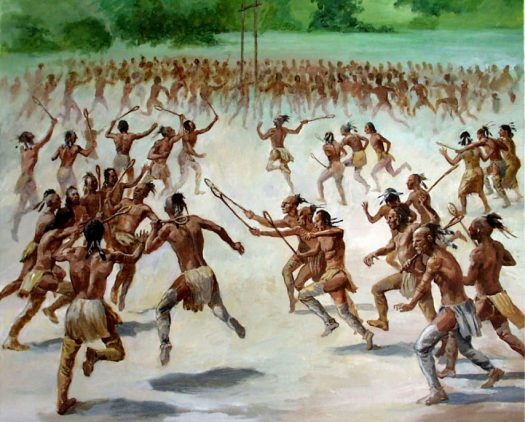 ▲
The history of lacrosse dates back to early American history with Native American players.
Google Images

▲
The history of lacrosse dates back to early American history with Native American players.
Google Images

Lacrosse may often times be associated as a “white people sport,” but the origins of the spring season sport could surprise many.

Originating as a Native American sport and referred to as “stickball,” lacrosse was mainly seen as a way to toughen up young warriors aside from recreation and religious reasons.

Unlike today’s ‘normal’ lacrosse games, for the Native Americans, their games were played between multiple villages with no max number of players which were usually between 100-100,000, they lasted for several days, and were spread across miles upon miles of land.

The goals were nothing specific either, they could range from a section between two trees to any other natural features approved during the game. The rules were extremely simple compared to the rules of today: the ball could not touch a player’s hand and there were no boundaries, everything was free-ranged.

But much like the face-off seen in lacrosse games today, the ball is tossed into the air to signal the start and players race to gain possession.

Appreciation for the sport comes with years of practice and play.

“I have always cared about the origins of lacrosse,” said Coach Lail, but I would say that I am more interested in it as a coach than I was as a player.”

This was also seen during Young’s experience with lacrosse and its history.

“Learning more of the history has given me a new perspective on the game, such as how important the sport is to Native Americans,” said Young. “It has affected the way I play because I learned the Natives believed the game should always be played with a clear head and no intention of killing others. This has led me to play for the love of the sport rather than prove my superiority to others.”

By researching the origins of the sport, players are exposed to a different appreciation for the effort that goes in, the goal of each match, and the game itself.

“In my opinion, it is imperative for players to know the history, not just as a means of respect to its origins and to Native Americans for the creation of the sport, but also to know that every time they step on the field, they are warriors,” said Coach Lail. “The movements and form in playing lacrosse is certainly a spiritual experience and I think there is a grounding element that is not only true to many Native American cultures, but is essential to the human spirit.”

Everytime a player steps onto the field, he or she is going into a battle not only against others, but with his or herself to push his/her limits, considering many are staying out on the playing field for two 25-minute halves.

Many people do not even know what lacrosse is itself away from a game involving a stick and a ball. But it’s making its impression on many across the world, and students in Prince George’s County are lucky to have this sport integrated into the public school system. This expansion gives players a leg up in the world of sports, as well as something very new for many to learn and possibly take into their future.

“I think lacrosse could be a great equalizer among communities, despite any upfront costs,” said Coach Lail. “[…]While it may never overtake football as a great American pastime, I definitely think the more it grows, the more it will become The American Sport.”

For more information on the origin of lacrosse check out these links: