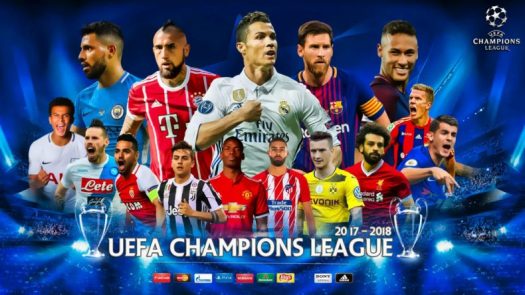 ▲
Known players from the top UEFA soccer teams have been pictured together.
Google Images

▲
Known players from the top UEFA soccer teams have been pictured together.
Google Images

Everyone has a favorite team in a specific sport and there will always be that one tournament that you just can’t wait to watch. One of the most competitive and watched tournaments around the world is the UEFA Champions League.

The Champions league is always hosted in Europe. The Union of European Football Associations (UEFA) are the organizers of this football competition. They take the most dominant teams in all of Europe and have them play against each other for a prize of €15,500,000. During the final stage they have a big celebration before the game starts. If two teams that are from the same country qualify for the final then the celebration would be traditional. In 2013, the final consisted of two German teams. For the opening ceremony, people acted like it was a chess match and they brought out knights, kings, and pawns to make it seem like it was realistic.

The 2017-2018 Champions league has to be one of the most competitive years fans have seen because all of the participating athletes are in such great shape and some even have rivalries against each other.

All teams that have qualified for the round of 16 are outstanding. Big names for the competition, like Real Madrid,  Barcelona, and Manchester City, have entered All these teams have won this whole tournament at least once. Real Madrid won the tournament twice in a row, and they are looking for another chance to get to the final and call themselves champions again.

Standing in the way are teams like Tottenham Spurs, who have entered their first Champions League tournament this year and have come off a draw against one of the best teams in all of Europe called Juventus. Paris Saint Germain have come off a loss 3-1 to the defending champs Real Madrid. The next leg of this game will be in Paris and fans still think that there will be a chance that the French team can pull off a win.

Another top contender is Liverpool FC from England, who have defeated their competition at an away match against FC Porto where the score ended up being 5-0. Many matches have yet to come, with great teams like Bayern Munich who has some of the best players in the world and Barcelona has the greatest player in the world, Lionel Messi.

While it is no guarantee that teams will qualify for the competition, fans remain hopeful.

“If [my favorite team doesn’t] qualify, I just think that they need better chemistry with the players that they’ve bought, and just get used to this new wave of young players taking over,” said senior Daniel Vivar.

Having a team that is playing in this tournament is quite nerve-racking, not only because some of the other teams are really good but also if a team loses twice in the final rounds, then they are out.

The Tottenham Spurs, an underdog team, is playing their first Champions League. So far some people have doubted them, but they have pulled off some wins successfully.

The Tottenham Spurs will  have to go against one of the strongest teams in the tournament, but if you want to be the best you have to beat the best.