Parkdale baseball may spend time away from home 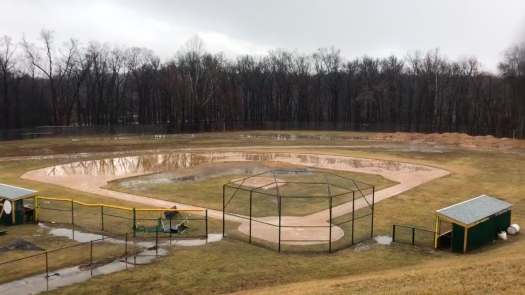 Parkdale High School’s Baseball team may face difficulties this spring season, traveling all of Prince George’s County to play as their home field is currently under development.

After the addition of Coach William Poulakos in the 2016 season, Parkdale’s Baseball team took a huge turn, going from a one-win team to a two-time undefeated team. In his two seasons here on Good Luck Road, Coach Poulakos accumulated an overall record of 23 wins and only three losses.

With spring comes baseball season quickly approaching, Coach Poulakos and his team have been preparing for tryout day since the end of last season and show not one sign of hesitation in terms of competing.

In the past, no opponent has proven to be a serious threat to Panther baseball.  This season, however, Parkdale Baseball may be facing an unlikely setback: their own field.

In recent years, Parkdale’s Baseball Diamond has seen an outstanding amount of improvements in terms of maintenance and quality from a rigid, lumpy field to one of pristine care. As the field can constantly affect their practices and their gameplay, the team has made it a point to maintain its upkeep.

However,Panther Baseball may have an “on the road” season because their field has recently been tragically mishandled. Huge lumps of dirt cover right field and tire-tread marks on left field, playing games or even practicing before games will be near impossible.

Despite facing field difficulties in the past, Parkdale Baseball has always managed to perform.

“We’ve spent countless hours on fixing our field that could’ve been spent practicing,” said team captain and senior Aaron Murray. “It’s what it took to play at home.”

Although spending time and effort on maintaining the field heavily impacts Panther Baseball, it is not co-capitan and senior John Yanez’s biggest concern.

“In a sense, Parkdale may lose baseball this year, we’ll lose the little support we do have,” said Yanez. “We do what he have to do to play at home, [but] now we’ll have to adjust to every field we play on. Every situation we face will be new this season.”

Not only will Parkdale baseball risk losing its small, but loyal, fanbase, but they may also have to face unfamiliarity based on not knowing the ins and outs of all the “away” fields.

“Now we’ll have to adjust to every field we play on,” said Yanez. “Every situation we face will be new this season.”

Alumni Israel Velasquez, who graduated last school year and currently plays for the University of Maryland Eastern Shore baseball team, is confident that the team will overcome this adversity and grow from it.

“Not everything will be the same for the team this year,” said Velasquez. “If they make the best of every situation they are put into and focus at all times, my boys will be fine.”

Parkdale Baseball begins with the start of spring, facing the Bladensburg Mustangs on March 21st.