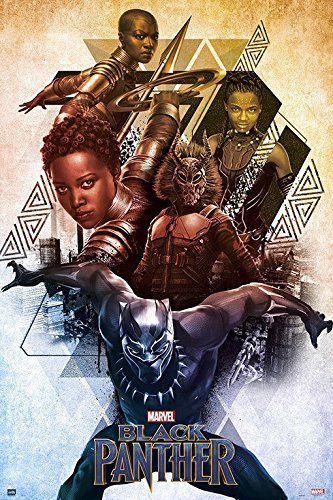 Black Panther may be the first movie where I could imagine me sitting down with a Neo-Nazi and Klansman, and still having one of the best times of my life.

Now the movie isn’t all cupcakes and pony hairs as it does have some problems that need to be addressed.

If you’ve seen the movie or had it spoiled for you by your archenemy, you’ll know who Erik Killmonger, played by Michael B. Jordan, is. Now Loki from Avengers and Thor 3 is funny and cool. The Vulture from Spiderman: Homecoming is very sympathetic and you could really put himself in his shoes. However when you combine these two, throw in some caramel skin, a cup of an unrealistic six pack and a pinch of a emotional backstory; you’ll have a fully developed villian that elevates the movie.

The Marvel Cinematic Universe, or MCU, has a heavy track record of poorly developed and flat villains. Despite that record, Black Panther produces a villian who explains what he wants, shows you what he’ll do to get what he wants and just has a charismatic smile or menacing grin after he’s done what he’s wanted.

What really does it for me with Killmonger is that I understand where he comes from and why he believes what he’s done is right. That’s what makes him the best villain in the MCU, hands down.

Sophomore Joel Simpson enjoyed the movie and especially the villain.

“My favorite character in the movie had to be Killmonger due to the great performance he gave giving a mix of comedy and very serious tension,’’ stated Simpson.

Putting all that aside, this movie isn’t just carried by its villain. The supporting cast of Black Panther presents great additions to the Marvel Universe, more specifically, the characters of Okoye, played by Danai Gurira, and Shuri, played Letitia Wright.

Gurira plays the head general of Wakanda, and she has some good fight scenes to show her qualifications. Her many deadly uses of a javelin, like stopping a moving SUV and stabbing someone in their toe, provided to be as thrilling as it was breathtaking.

Since this is still Marvel movie, you have to have comic relief that is quick with the quips and only ruin dramatic scenes a few times.

Wright’s character plays the comic relief and  tech genius in the movie. Everything from the Black Panther’s suit, his sound proof shoes called  “sneakers” (get it?) , and the technology to mine Vibranium, the strongest metal in the universe that’s only found in Wakanda, is created by her.

When it comes to her comedy chops, she actually says  “Don’t scare me like that, coloniser!’’, when she’s spooked by Martin Freeman’s character, a white man. Other than a reference to a dead meme, that made me want to gauge my eyeballs into my soda, she wasn’t annoying and on occasion added some good humor to the movie.

Another standout character that has to be mentioned is M’Baku, played by Winston Duke. In the beginning, this character was more of a typical rival to Black Panther as he challenges him for the throne earlier in the movie. Towards the end of the movie though, we’re reintroduced to a more comedic side of the character. Even though Shuri has at least an hour more of screen time than M’Baku, he really gives her a run for her money for the title of comedic relief.

You know that the movie has a great villain and good characters, but what about the action scenes. Did they make me cry? Did I feel every slash, shot or stab? Did I question my existence in this cruel world? The short answer: yes.

Now when going to see Black Panther, you must understand that this movie isn’t the most action-packed superhero movie. There are a few long stretches where there’s just dialogue or exposition instead of action.

Yet when that non CGI action is on the screen, I could feel every blow imposed against our protagonist or antagonist. The only two actions that were thrilling for me was when Black Panther, T’challa is his name by the way, fought M’Baku in the beginning of the movie and when he battled Killmonger in the middle of the movie.

These scences stand out from the CGI fight scenes because they carry more weight as you see two humans brutally fighting each unlike two computer generator images who look like they belong in a Playstation 2 game.

Now this is the part where I must divert from the “bandwagon”, as this movie isn’t as perfect as it was hyped to be or that I wanted it to be.

When sitting down in the theatre, I just want to be catapulted right into the world of Wakanda, but I feel like I was only thrown halfway. When the movie is set in mystical foreign land that we know nothing about, I’d expect to see the day-to-day lives of its citizens and how much different it is to where I live.

In Black Panther though, the movie would either take place in the throne room, Shuri’s lab or this same little market street that we see in the beginning and the the end.

Sure, we’re told what the Wakandians believe in, like isolation from the rest of the world, but we’re never shown it. Instead of having the Wakandian people play more as background characters, we should have them more front and center in the movie. Getting the perspective on how Black Panther’s people view him, love or hate, can build up how important he is to his people and why we want him to win in the end.

Another gripe I have with the lead character, Black Panther. T’challa is the least interesting character in his own movie. Now I don’t mean he’s a bad character; he actually has a very thought-provoking conflict that he ponders over the course of the movie, he’s just not the most entertaining character in the movie.

A character like Killmonger is exciting to watch because he has character traits that really seizes the audience’s attention. For example, his cruelness towards others, his desire for vengeance and his overall hatred of T’challa makes him an audience-catching character.

Now I’m glad T’challa isn’t another joke cracking protagonist, but what we’re given of him isn’t very enthralling. It makes since that T’challa is a very composed, incontrol and calmed character because he’s a king.

Although there are a few short burst of anger or frustration when he meets his father is great to watch due to him being that composed king for most of the movie, it wasn’t enough for me. There were just too many scenes in the movie that I desired more of a reaction from the character, yet all I recieved was dull response that made me think he was smoking some Wakandian “grass”.

Black Panther is the 18th movie in the MCU, and it feels as fresh as the universe’s first movie,  Iron Man.

You’ve also probably heard that the movie is very political movie, but I don’t think it was. Now it does carry political themes, mostly coming from Killmonger, but I would compare it more to another Marvel movie, Captain America: Winter Soldier.  In this movie it confronted the topic of government surveillance, yet it was still a superhero movie.

Some people will feel empowered by the movie, some will think it’s just an average Marvel flick while others will love the movie but not feel empowered. It’s a good movie and I’d give it a 4 out of 5.