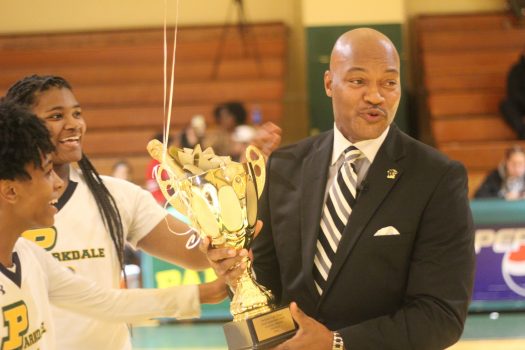 The day of the Parkdale Girls Basketball program when they blew out Northwestern 68-28 on January 30 was not only a big deal for the team but also for the head coach Coach Watson’s career reached a new level that night, as he coached the Lady Panthers into his 100th win.

Off the court, Coach Watson is known as one of the most respected security guards at Parkdale. In the hallways, he means business by enforcing the school rules, especially the no earphones or hoodies rule, students being in class and keeping our school safe.

Not only is he great a security guard but also as a coach.

“I feel like I’m the best coach around girls basketball,” said Coach Watson. “[but] I want [to] give the most credit to [the] players that put in the work.”

Watson may be proud of his accomplishments on the team, but he attributes much of the Lady Panthers’ success to the team.

“Once again, the players put in excellent work towards the Parkdale Girls’ Basketball program,” he said.

Many of the traits that make Coach Watson a memorable security guard are the same things he uses on the court towards the players.  Parkdale Athletic Director Coach Moore prides Watson for his determination and strictness with the players.

“Coach Watson is a no nonsense coach with his players,” said Coach Moore. “He is very tough and demanding on them but at the same time he provides them with every necessary tool to succeed. The young ladies have bought into his program 100 percent.”

And even though his no-nonsense way of handling business could be hard on the ladies sometimes, they know it is all out of tough love.

“[Coach Watson] gives us the materials that we need to make us better,” said senior Drew Calhoun, one of the Lady Panthers’ shooting guards and small forwards. “He pushes us to work hard, so whatever we can do, we’re prepared for it.”

Although Watson can be tough of the ladies of the team, it all pays off in the end.

“I love it when I hear them complaining about how tough practice is and how much he gets on their case,” said Coach  Moore. “And then when game time comes around and you look at the scoreboard, they have defeated their opponent by 20 points.”

Coach Watson’s toughness on the Lady Panthers show he means business on the court, but he means just as serious of business in the classroom, too.  Calhoun recalls that any help the team needs on school work, they can go to him for support.

“One hundred wins was very important to Coach Watson,” said Coach Moore. “But 100 successful young women would be just as satisfying.”