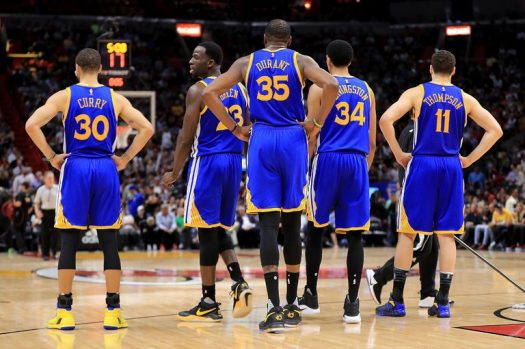 ▲
Golden State's track record will lead them straight into the championships and out victorious.
Google Images

▲
Golden State's track record will lead them straight into the championships and out victorious.
Google Images

Golden State Warriors will, without a doubt, win this year’s championship. From chemistry between the players to consistent ball movement, the Warriors just keep getting better.

ESPN NBA Team Stats  show Golden State is averaging 30 assists a game, which is the highest in the NBA. Their offensive efficiency rating with 114.1 is the best in the NBA.

This high scoring done by the Warriors has led them to have won the most games in any three-year period in NBA history. The warriors are averaging an all time high this season with 116.1 points per game. That’s more than Larry Bird’s Boston Celtics in the 1980s.

This season Golden State had faced the Celtics at home in a rematch where Golden State lost the first game by just four points in a thriller game and an outstanding performance by Kyrie Irving. This time at home the warriors came prepared, it took a good game from and everyone but a great game by Steph to lead the Warriors to victory. Curry had 49 points and Kevin Durant had a solid 20 point game to seal the deal, and was still able to beat Kyrie with 37 points and the Boston Celtics 105 points. The score was warriors 109-105.

With the addition of Kevin Durant in last years off season, Golden State has been able to remain efficient and still have the urge to show out every night, even after winning the NBA championship for the 2016-2017 season.

The Golden State Warriors are ranked first in defensive rating this season. Their 99.1 points allowed per possession is 8.8 points allowed fewer than the postseason average. That’s three to four possessions better per game than other playoff teams.

James Kamara ‘18 said, “ The Warriors is a team filled with superstars, taking over the league day by day, regular seasons to postseasons, playoffs to playoffs, championships to championships, they are the true kings of basketball”.

And then there’s Steph.  Good ol’ Steph. The two-time MVP, unanimously voted-for in one of those seasons, Steph Curry is balling. This season alone Curry is fourth in scoring in the NBA with 26.8 pts per game, he’s the league’s leading 3pt shooter.

While his efficiency is off the charts, Curry’s player efficiency rating is at 28, making him Top 5 in that category.

Helping him lead the charge is Draymond Green, the vocal leader of the Warriors.. He is known to energize the team, keep everyone locked in the game and focus each possession.

After last season win in the finals Draymond had a lot to say about the cavs and his team the Warriors in Finals.  Green said by SBnation, “They didn’t stand a f****g chance”. He followed up by saying that, “it pissed me off we didn’t sweep them, though”.

Green has also been a great player on the court leading the team with over 7 assist and averaging 11.4 he’s been key to their success this season.

Last but not least, Klay Thompson. Thompson has been just as consistent as Kevin Durant and Steph Curry this season.

Thompson has played his role to perfection this season by giving the Warriors his best defense and offense and arguably being the best two-way player in the NBA. According to ESPN’s  players stats, Thompson is shooting 44 percent from 3pt and leading the Warriors in it.

Golden State has the best team by personnel and head to finals ready for whoever, and likely will the two time reigning NBA champions again. Don’t believe me, just watch.