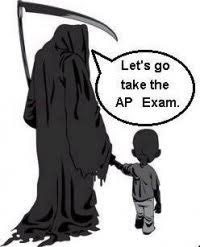 ▲
Rest in Peace to your social life, peace of mind and dignity upon AP Testing Season.
Google Images

▲
Rest in Peace to your social life, peace of mind and dignity upon AP Testing Season.
Google Images

Are you , yes you, taking part in the great AP program? If yes, who hurt you as a child? Because something is very wrong, masochistic even. Who would subject themselves to such torture? It reminds me of the enhanced interrogation back in Guantanamo Bay, but that’s a story for another time. What you’re here for is a guide on how to pass your AP exam.

Step One: Disassociate from your friends.

It was the first logical step I could think of in this instance. I mean if you really think about it, destroying your social life gives you so much time to study. Then, you can pass the AP exam. Sure, you lose close friends that bring you joy, but that doesn’t matter because you get to have a successful life. Well, you have a guaranteed  chance to have a successful life. Let’s not push your luck buddy.

Step Two: You need to acquire some adderall.

Now, the way of doing this is faking ADHD (attention deficit hyperactivity disorder) to your doctor to get your hands on some adderall. This is probably the hardest way, but you will get some clean untainted prescription drugs. If you don’t want to work on your acting career right now, you can always find a “local hustler,” as the kids say. You can find them in dark alleyways and on street corners in low-income neighborhoods. Just carry a piece of weaponry on  you when venturing into these areas. A broadsword may suffice.

Now this may sound crazy, but you should probably study the material for your AP subject. So pop that adderall, ladies and gentlemen, because its time to study some AP material. Now for the fullest effect, you need to put on the training montage music from Rocky. Studies have shown that listening to the Rocky montage music actually increase the effects of physical and mental training.ere. I can’t find the studies right now, but trust me, they’re out there.

Now when it comes around to the weeks of AP testing, you will be ready to take on that exam. You can get that five and have it be denied by a college because some colleges don’t even accept certain AP credits. Now, don’t worry for those who still aren’t ready for the exam. I have a backup plan entitled Operation Identity Swap.

If you’ve gotten to the point where you are already at testing week, the plan may not work and could end up getting some people thrown in jail. I mean, is it really that illegal to have someone fake your identity to pass an AP test for you? Well yes very illegal; possible jail time illegal, but hey you want that five on the exam, you better get that smart kid.

Don’t worry everybody, even if this guide doesn’t get you that four or five on the exam, it isn’t the end of the world. I mean sure, you tortured yourself for a year with no real pay off, but whatever. You still can show off that you are better than people just because you were in an AP class and isn’t that what this is all about? Pure narcissism.