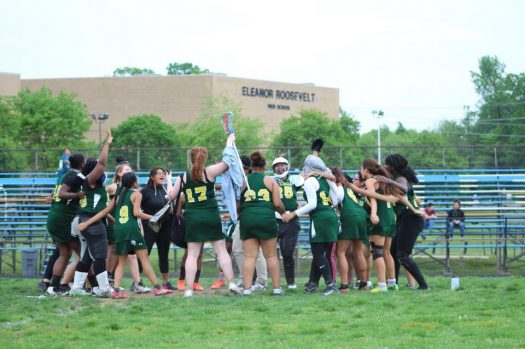 Lacrosse is a new sport to [most of] PG County, and at Parkdale in particular the boys’ and girls’ teams are on the rise. Last year, the season was pretty smooth sailing, and the athletes were learning to challenge themselves with a completely new sport. For the 2018 season however, it’s not looking too good.

Around early November 2017, huge piles of dirt were placed along the outskirts of the baseball field and some moved to the football field. Many students saw this as the supposed signs of the rumored turf field under construction, but they were wrong. The dirt was meant to level out the field.

The problem was that this dirt was not the proper dirt, but instead, was filled with trash, pipes, small boulders, and other dangerous factors. As a result, the fields, as well as the track, were destroyed and no action was taken to fix the problems until March, which marked the start of Lacrosse season.

Due to no field to play on, let alone practice on, teams were forced to take alternative steps to greatness.

Unlike Parkdales’ baseball and softball teams who have other fields set up to practice on, Lacrosse and track had nowhere to go besides inside Parkdale. The track team was forced to run around the upstairs hallways while Lacrosse was moved into the two gyms. The problem for the lacrosse teams is that basketball courts aren’t set up for lacrosse field standards.

Girls’ Lacrosse Head Coach Sara Lail has recognized the setback within the team and is doing all she can to try and improve them.

“It feels terrible not to have a field to play on because in Girls’ Lacrosse the field has many components that are integral to the game,” said Coach Lail. “I really just try to keep them working on basics, passing, catching, cradling, how to move the ball, defense, and working as a unit.”

Junior Captain Sarah Nguyen sees the struggles her teammates face on a daily basis and how a basketball court is no space for learning lacrosse.

“Practicing in the game would only help with basic lacrosse exercises. Girls still struggle to figure out what to do on an actual game because they do not know where to go and what can or cannot do,” Nguyen explained. “The gym is not big enough to allow the girls to practice their long distance throws. Because the girls are so used to the small space, they are not aware of how big a field is and they wouldn’t be prepared to even run around in it.”

Despite not having the proper area the team holds a record of 6-6 (as of May 3, 2018). The team also shows improvement despite their setbacks

“While some of the new players are still trying to get the hang of it, since they may not get as much game time as others, they are gradually becoming aware of the rules of the game,” said Coach Lail. “There is not as much progress as I would like, but at this point, something is better than nothing.”

It is rumored that more schools in PG County will be receiving a turf field, with Parkdale being one of the next in line. But for some players, this doesn’t really matter.

“If I could change one thing about what has happened to the field, I’d immediately get turf. Although it wouldn’t be ready before the season was over, it would at least be available for the next year,” said Nguyen. “I heard that we are going to get a turf field next year anyways so working on the field now would be a waste of time and energy because it will be removed. It would’ve been better to get started on setting up a turf early as early as possible.”