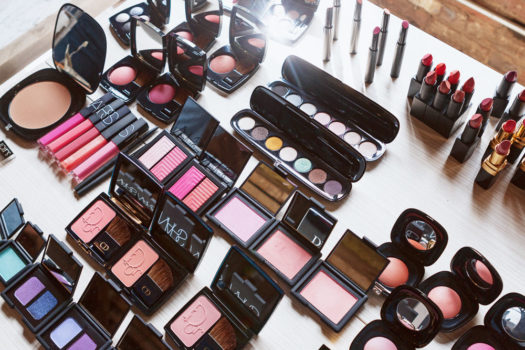 ▲
In recent times, Makeup is being used by males, not just females.
Google Images

▲
In recent times, Makeup is being used by males, not just females.
Google Images

Estee Lauder, NARS, Chanel, and Kylie Cosmetics. So many brands, and who do they cater to? If you think it’s just the ladies then think again.

Darroyl Jackson Jr., known as King Koture on Youtube, is a male makeup artist who uses many of those lines on his videos and everyday life.

The makeup industry is now becoming dominated with male makeup artist. Although makeup is mainly associated with femininity, males have long participated in makeup.

The first known records of makeup used by males stretches all the way back to as early as 400 B.C. According to How Stuff Works, King Tut had thickly lined black kohl liner that extended beyond the eyelids to the temples during the New Kingdom. Dramatic eyeliner was customarily worn to communicate wealth and status.

According to Birdie, it wasn’t until the mid-1800s when makeup became delegated to one specific gender but times have indeed changed, people are becoming more accepting of men who use makeup. There is no label on makeup that says “Only for women” so why should men be discouraged from doing their makeup too?

KISS, a renowned rock band, is known for their elaborate white and black faces, but wouldn’t that be considered wearing makeup? No one shamed them, but why is that?

Have you ever seen the dressing room of someone getting ready for a movie or show? Both men and women have gotten products applied to them prior to shooting. That would be considered makeup since those products enhance or alter the appearance of the user.

“….Mainly because I am a male in makeup. Do people know that men have been wearing it for years?” said Jackson.

There are no major differences to men wearing makeup compared to women. Both genders have to learn how to do their makeup and figure out what works for them.

“It’s as easy as 1, 2,… 3,4, and 5,” said Jackson. “All it takes is practice but, most importantly to me is understanding your shades and face structure.”

While some may argue that males who wear makeup are mainly part of the LGBTQ+ community, Jackson says “I believe one does not have to be apart of anything but the love of God and to at least have faith the size of a mustard seed. We should decide what we like and want from the heart, not the community.”

Some may choose to wear makeup simply to give themselves more confidence or because they use it as a means of self-expression.

“It makes me feel extra CUTE like I’m that [obscenity] #Period,” Jackson explained. “It’s like a guy going without a haircut. How does that make him feel? Or a girl going without earrings. How do she feel it makes her look?”

People really need to be more empathetic and accepting of the feelings of others. It’s not right just to look down on them because something their doing doesn’t align with the standards society has set.

According to Collins Dictionary makeup is defined as “things such as lipstick, eye shadow, and powder which some women put on their faces to make themselves look more attractive or which actors use to change or improve their appearance.”

The dictionary needs to catch up to changing times because women definitely aren’t the only gender using makeup.

“The world would be a better place if we stuck together. We do it better when we do it together. “ said Jackson.