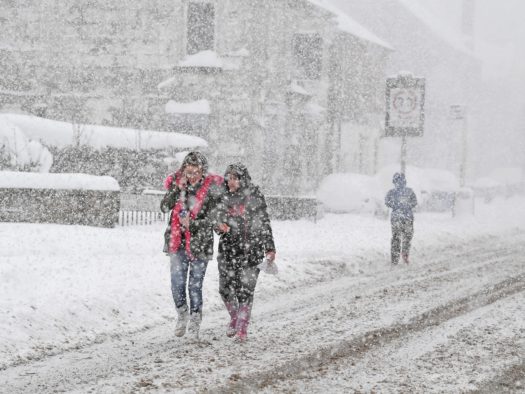 It’s officially winter season and that means waking up to see if weather conditions are affecting schools daily routines or not. According to the PGCPS website, “the decision to delay or close schools is not taken lightly,” but does this mean the county would rather keep schools open than closing them?

In November, all weather stations were saying that a mixture of snow and rain was headed toward the DMV area. This resulted in many counties closing or delaying their schools, but PGCPS operated on a normal schedule.

“They definitely should have cancelled schools or at least had a two-hour delay because it’s not fair to the kids who don’t have a bus to ride,” said junior Portia Adams.

At first, the weather wasn’t so bad, just cold and light icy rain, but as the day went on the weather conditions got worse. The snowfall increased and so did the icy rain which resulted in school grounds becoming slippery.

It isn’t just snowfall, but it’s also rain that affects students, especially those who walk.

“On the bridge, before you get to Parkdale, there’s been a really big puddle of water and cars drive through it really fast without caring about the kids,” said Adams. “Some of them end up getting all wet.”

Princes George’s County needs to consider those students who walk to and from school. Students walking up and down hills can cause a serious accident. Just like black ice can affect cars, it can affect students as well causing them to slip. Rain can also cause a student to slip and fall.

“I don’t like rain because I get soaked,” said junior Promise Maidoh. “You step in puddles and your shoes get messed up.”

Another thing PGCPS needs to consider is that some bus stops are already in bad locations and get even worse when it is raining or snowing.

“When I leave my house to start walking there’s this hill and there’s always ice,” said Adams. “Sometimes people will try to avoid it, but there’s ice on the streets too.”

On PGCPS website, it explains that it is the county’s “long-standing practice to remain open as long as roads are safe, open and passable, and predicted to remain so.” Even if roads are safe, this doesn’t mean sidewalks or temperatures are safe enough for students to be in. Sometimes the school itself isn’t safe or even warm enough for students, especially with the policy that students can’t wear hoodies. This just makes it even worse.

With the Winter season just starting it’s important to stay alert and know what’s going on in your county. Here are some ways to stay alert in PGCPS: