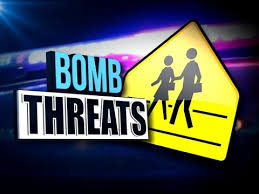 According to the Prince George’s County Public School Code of Student Conduct Memorandum of Understanding, making a bomb threat can result in a level-three offense, mostly handled by extended suspension, although sometimes the students are charged as adults.

In January 2019, Parkdale along with two other schools, Bladensburg High School and William Wirt Middle School, started the prosperous new year with a bomb threat which included statements like:

Although this threat happened outside of school, administration reinforces the procedures that should take place for student and staff safety.

“When first receiving a threat we secure the building and make sure all the doors are locked and that teachers go into lockdown mode. Teachers have their windows covered specifically the window to the classroom,” said Dr. Mugerwa, the 10th grade assistant principal. “All students are supposed to turn off their lines of communication so that means their cellphones have to be turned off and then wait for the all clear by the security personnel or administrators by the PA or by other means of communication; that is a standard Prince George’s County protocol that we follow to ensure we are in compliance.”

Over the course of the last two years, bomb threats have become more frequent, some even saying it has become the “norm.”

However, some students feel these threats are not something schools should get used to.

“As far as bomb threats go, I don’t think they are the normal. However, I do feel as if they’ve started being taken more lightly which I think is a huge oversight by both the students and the staff,” freshman Akeon Rogers. “Even if everyone is doing it, that does not mean they should become the normal. I think the staff should address this matter and stress the severity of the issue when it comes to making these threats.”

Although students may feel like they are in the dark sometimes with the standards and procedures of threats, administration does everything in their power to assure safety throughout the school.

“Every threat we take serious because we want to ensure our families are safe and our students are safe and our staff are safe. Also from a parent perspective, no parent should ever be fearful that their kids are going to be in danger when they come here [Parkdale High School]” said Dr. Mugerwa.

While most of these threats are done outside of school, consequences of making them are still very severe and very real.

“When it comes to being prosecuted to the fullest extent of the law, removed from school, expelled and being charged federally, it starts to wake up [students]. ” said Dr. Mugerwa

During the month of December, schools, businesses, and government offices across the nation were evacuated because of bomb threats. Unfortunately, that’s not the first of the incidents.

According to BBC News, 2018 was the worst year for school shootings in the United States, 113 people have been killed or injured.

“One of my biggest concerns is that students might not take this seriously,” said Dr. Mugerwa. “They will be joking and laughing, but at the end of the day, these [bomb threat drills] are helpful to us to ensure that something like [real bomb threats] do not happen to our school because everyone is taking every drill seriously and are not joking and playing around in the classroom.”

According to Homeland Security, if you receive a bomb threat you should: