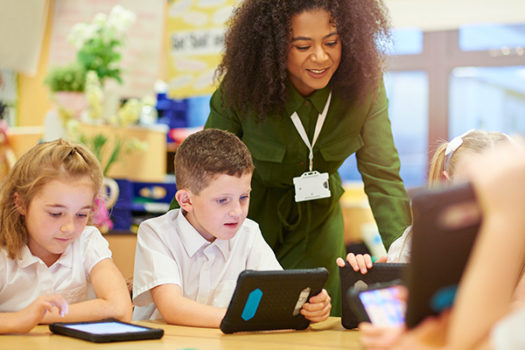 With the ever-growing dependence on technology in everyday life, it is no surprise that devices have become a huge part of academics, as well.  But what happens when a course is technology-centered but doesn’t have the materials needed for students to succeed?

According to the research done by the National Center for Education Statistics (NCES), public schools provided handheld devices to 49 percent administrators and 15 percent of teachers but only 4 percent of students.

This proves to be an issue in many classes, including business administration teacher, Ms. Alvarenga.

“Unavailability of these resources forces students to use their own cell phones, which makes it difficult for me to monitor what sites my students are using,” Ms. Alvarenga explained.

Technological materials that could make learning easier and more effective include tablets or computers. However, some students lack their own hand-held devices, let alone ones provided by the school.  This doesn’t just hinder students but also teachers, because they can’t use academic programs like Google Classroom and Edmodo effectively.

Some counties in the country, however, provide their students with devices.

Some teachers argue, however, that technology use in the classroom is an opportunity for students to lose focus of class work, text or visit websites that are inappropriate for class.

According to a study published in the journal Educational Psychology, students who had cell phones or laptops present while a lesson was being taught scored five percent, or half a letter grade, lower on exams than students who didn’t use electronics.

Some schools, like Charles Carroll Middle School, provide personal iPads to all students, but the key is to caring for them properly.