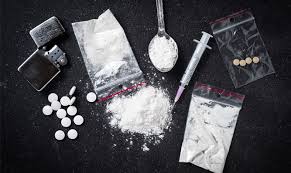 ▲
Drug use is an ongoing issue.
Google images

▲
Drug use is an ongoing issue.
Google images

In 1971, President Richard Nixon identified drug abuse as “public enemy number one in the United States.”

Opioids are a class of drugs that include illegal drugs like heroin, synthetic opioids such as fentanyl, and pain relievers available legally by prescription, such as oxycodone (OxyContin®), hydrocodone (Vicodin®), codeine, morphine, and many others.

Some effects of Opioid use include:

The drug slows down the chemical process, so a person abusing opioids can have slurred speech and a lack of focus. They can also experience shallow breathing and, if taking large amounts at once, can go in and out of consciousness.

Prescription opioids used for pain relief are generally safe when taken for a short time and as prescribed by a doctor, but they can be used misused.

The Samhsa’s Center for the Application of Prevention Technologies reports that as of July 2017, 40 states and the District of Columbia have instituted Good Samaritan laws. These are policies that provide legal protections for individuals who call for emergency assistance (such as 9-1-1) in the event of a drug overdose.

This may include protection from arrest and/or prosecution for crimes related to drug possession, possession of any equipment intended or modified for making, using, or concealing drugs , and other crimes. These laws are designed to encourage people to summon emergency assistance if they experience or witness a drug overdose.

According to the Council on Foreign Relations, “the vast majority of those who overdose on opioids are non-Hispanic white Americans, who make up close to 80 percent of the annual total. Non-Hispanic Black Americans and Hispanic Americans account for about 11 and eight percent of cases.”

In the 1960’s and 1970’s, heroin use surged, mostly caused by Vietnam War soldiers who were exposed to it overseas. This drug viciously attacked poor inner-city neighborhoods the most, where many of the victims were Black and Puerto Rican.

There was little compassion then for heroin addicts, John de Miranda, a longtime addiction professional who worked with homeless men in Boston’s South End in the early 1970’s, recalled in an interview with The Chicago Tribune. “We basically cared for the men nobody else wanted to deal with,” he said.

The heroin epidemic ended in the late 70’s but crack, a new dug rose in the 80’s once again attacking within the Black communities of the inner cities.

The Tribune continued to state that crack and heroin were both seen as tied to urban blight, the process by which a previously functioning city falls into disrepair and violent crime, which triggered a drug war and harsh jail sentences for the sale and possession of crack, typically consumed by minorities, that were far more severe than the penalties for regular cocaine, the powder form of the crack rock that is typically consumed by whites.

The American Civil Liberties Union reports that today, black males have a 29 percent  chance of serving time in prison at some point in their lives, Latino males have a 16 percent chance, and white males have a  four percent chance. Even though whites outnumber blacks five to one and both groups use and sell drugs at similar rates, African-Americans comprise:

In seven states, between 80 percent and 90 percent of prisoners serving time for drug offenses are black.