Hate crimes on the rise in recent years 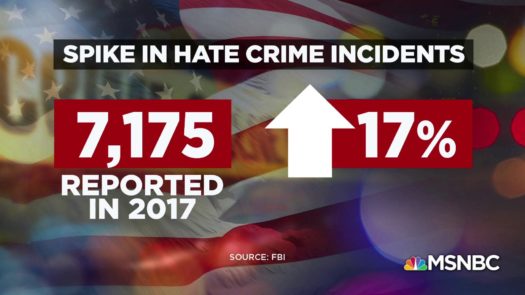 ▲
Since the beginning of President Trump's tenure, hate crimes in America have been on the rise.
MSNBC

▲
Since the beginning of President Trump's tenure, hate crimes in America have been on the rise.
MSNBC

With the election of President Donald Trump came a disturbing rise in general hate and malice in America. From violence at Trump rallies to swastikas painted on the side of homes, many have attributed this outward and open hate to the rhetoric of the President.

In early February, Jussie Smollett, a gay African American actor best known for his role on FOX’s hit series Empire, was allegedly attacked by two men in Chicago. Smollett claimed that his attackers were yelling out racial and homophobic slurs and pouring unknown chemical substances on him, according to his report to Chicago police. One of Smollett’s alleged attackers also put a rope around his neck.

While this incident has come into much speculation on the validity of the entire attack, … The treatment of minorities in America is drastically changing and diverse populations, like that of Parkdale,  could be directly affected.

According to statistics released by the FBI, hate crime incidents reported to the FBI increased by about 17 percent from 2016 to 2017, the year President Trump took office.  The report found that 7,175 hate crimes were reported by law enforcement agencies in 2017, up from 6,121 reported incidents in 2016. Of the 7,106 single-bias hate crimes reported, 59.6 percent of victims were targeted because of the offenders’ race/ethnicity/ancestry bias and 15.8 percent were targeted because of sexual orientation.

Although the country has seen a spike in reported hate crimes, that does not mean these types of incidents are new.

“I would experience hateful words in the military, [and] the soldiers I would fight with even called be ni**er and f*ggot,” said 12th grade English teacher Mr. Adams. “These crimes made me realize I’m safe nowhere, not in school, work anywhere. Jussie Smollett’s case just solidified my view even further, that minorities will be treated foully no matter their status.”

Hate crimes, like those experienced by Mr. Adams and many others, not only affect the victim personally but also how they may begin to feel about other races.

“I’ve never experienced a hate crime but my older sister has,” said a senior student who wished to remain anonymous. “She was burned all over her body by a group of white girls outside a college dormitory. The hate whites show to us black and Hispanics made me hate them right back. Trump displays this idea of “white power” through his actions and ignorant words.”

Although racism and discrimination against all types of minorities has been happening for centuries, a hateful leader can breed hateful people into thinking it is acceptable to be outwardly discriminatory and prejudice. The increase in hate crimes toward the diverse people of America since President Trump’s election can’t be a coincidence. Maybe Trump doesn’t view the world the same as these hateful people do but he is surely fueling the fire they need to continue their hateful actions.

Minorities of America are being shaken up from the oppression they are facing and the passivity won’t last much longer at the rate things are going. And with groups like Black Lives Matter determined to put an end to the unfair treatment of minorities, the clash with white supremacists has no end in sight.