Lady Panthers get off to fast start entering 2019; take losses in playoffs 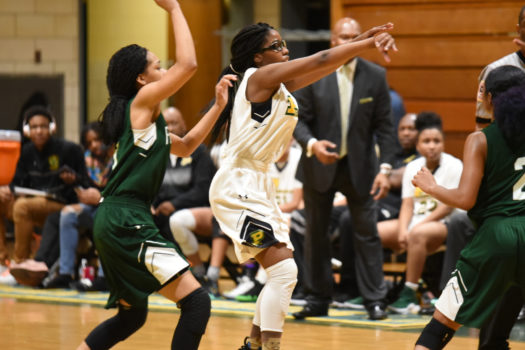 For the past four years, Coach Watson and the Lady Panthers Basketball team made four consecutive trips to the 4A South Region Final, winning once in the 2015-16 season. In those four seasons, Parkdale won 17-plus games in which they were ranked either second or third in the 4A conference, were a top 20 team in the DC Metropolitan Area, and even won the entire region in the 2016 season. Although the Lady Panthers are consecutively top tier basketball year in and year out, this year writes a different story.

“This team this year, you have to do a little bit more coaching versus the last couple of teams where we’ve had ladies play on a consistent basis with AAU (Amateur Athletic Union;association for travel basketball),” stated Coach Lawrence Watson, who is in his seventh season as the Lady Panthers head coach.

The youthful Lady Panthers team for the 2018-19 season now stands at a 12-12 record, a record keeping them from being a top five team in the 4A South Region.  In the first half of the season, the Lady Panthers went 2-7, only beating teams outside of their conference, McKinley Tech and College Park Academy.

Parkdale’s leading scorer, junior forward Nycerra Minnis averages 13.8 ppg, 17.3 rebounds, 4.2 blocks and 3.2 steals, a contest being the Lady Panthers’ most efficient scorer down low. Her hefty personal statistics leave teams night in and night out, finding ways to guard her.

“Each night, I’m not really thinking about my personal stats. I’m think about what i can do for my team as a whole,” said Minnis. “ With rebounding and scoring, I just know that it’s helping out my team, and each night if I put up more numbers than the last, it helps me as well.”

Being a 50-percent free throw shooter, Minnis was definitely missed when the Lady Panthers had to play against tough competitors such as Eleanor Roosevelt, number-one seed Charles Herbert Flowers and the DCIAA Champions Dunbar High School due to a knee sprain that occurred in the Lady Panthers’ home opener against College Park Academy.

In all of Coach Watson’s seven years coaching at Parkdale, this season holds the most losses he has accumulated as the head coach. Coach Watson has a track record of sending numerous girls to the next level of collegiate basketball. This year, he has faced many tough losses like one to the Bladensburg High School–a team to which the Lady Panthers rarely lose– and the up-and-coming Suitland Lady Rams Basketball team.

Just days later, however, the Lady Panthers lost their second playoff game to Laurel, resulting in a final score of 49-42.