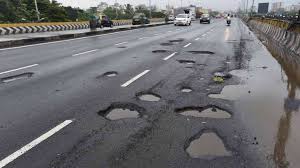 ▲
Potholes on road can cause driver thousands of dollars
Google Image

▲
Potholes on road can cause driver thousands of dollars
Google Image

According to american automobile association, American drivers pay approximately three billion dollars , or an average cost of $300 each, annually to fix car damage caused by potholes.  Because of the potholes up and down Good Luck Road, Parkdale students and staff may be spending this money, too.

Most of  Parkdale student drivers work to pay bills and help their parents out, so if a pothole was to damage their car while driving, it would be extra money spent on the car rather than other expenses they need to cover.

“Yes, it can be a problem to the students that pay for their own things,” senior Stephanie Murillo said. “[Potholes] can cause the car to have a lot of problems that the student would need to pay for.”

Warm spring weather melts away slippery snow and ice, bringing out one of the most problematic elements on the road: potholes.

Potholes are road imperfections that occur when soil compacted beneath pavement becomes weakened or displaced. Speeding where there are potholes can not only damage your car, but also hurt passengers and the driver, and further damage the road. Accidents could occur, which also puts others in danger.

“I do think it’s dangerous because hitting a pothole can completely mess up your tires’ axis to curve and make the tire change direction,” said Murillo. “It  can also puncture or damage your tire which can cause further damage or an accident.”

Students have other things they want to save money for. For example, students may be saving for college or something they really want, and getting into an accident may force them to use the saved money.

“Hitting a pothole can probably set me back because I’ll be driving from Berwyn Heights which is around Greenbelt all the way to Baltimore for college,” said senior Christian Manió. “So hitting that pothole will keep me from even getting to my college and also set me back on payments.”

As the 2018-2019 school year came to close, there were about four accidents right off of Good Luck Road, all mainly caused by potholes. This is a prime example as to how dangerous potholes can be.

The average repair cost of an accident is 306 dollars. Even worse, hitting a pothole – or taking the wrong measures to avoid one – could cause a crash and personal injuries.

“It can also cause an accident due to the fact that people slow down or swerve to try and avoid the pothole,” said Murillo. “People don’t really worry about hurting other people when trying to avoid the potholes.”

Many student drivers buy their own cars, using their hard working money, and they take care of it because they know what they had to do in order to get it. Them hitting a pothole may put them in debt depending what they have to pay for.

For example if a student was to drive over a pothole, it could set them back about $5,000 to replace a full suspension, depending on the damages it did to the car

“I’m a high school student and I pay for all of my car expenses so any other damage to my car will be a heavy hit to my bank account because of the repairs I may have to conduct onto my car due to the potholes,” said Manió.

As of now, the potholes on Good Luck Road have yet to be repaired since the winter when they got more prominent.