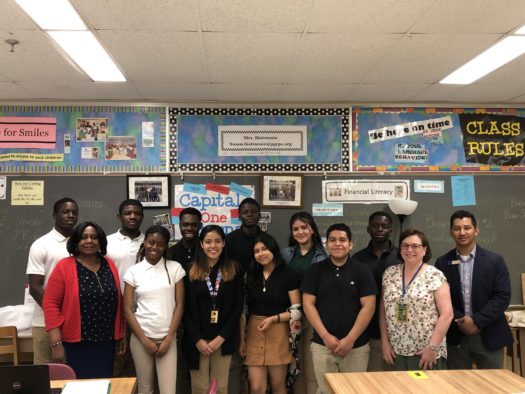 For a little less than a decade, Parkdale has housed one of only four student-run Capital One banks, along with schools in Harlem, NY; Bronx, NY; and Newark, NJ

Towards the end of every school year, the Capital One team begins recruiting for the following year’s student bankers–a position that is held by only 10 students in the school.  In April, it was announced that the following students would be joining the team for the 2019-2020 school year:

“This program is a life-changing experience for these students,” said Parkdale teacher and coordinator for the Capital One student bankers Ms.Bistransin. “They learn professionalism, they learn confidence […] the transformation is pretty amazing.”

location because of the area and how many schools and students were located in it.

Because there are only ten positions open per year, candidates must go through quite a process to be accepted.

The program first takes in a lot of students and  provides information explaining the paper application, which includes a one-page paper on why they want to be in the program and a professional resume.

After submitting the paper application, every student is secured one interview with the Capital One bosses. From those students, the bosses choose 20 students and give them a second interview.

They finally choose the final 10 students that they see as the best option for the bank and give them the job.

All these things were told to the students before hand to give them time to prepare.

“We put ourselves in this mindset that you’re at the interview [and] these are the people from the capital one,” said junior student banker Natalia Gallegos. “We had to prepare ourselves [to] know how to be formal when we talk and get the words that we say to our friends out the way, as well.”

The program helps mold students to become a better version of themselves. Many students who have been in the program before have graduated high school and worked at a Capital One bank and have became leaders in their positions.

Student bankers are scheduled to work both at the bank at Parkdale and an outside branch where they would interact with customers other than their peers.

Although all students aren’t made to continue working in a Capital One bank after graduation, many choose to because they feel that the bank has helped them succeed as a worker and as a student and has also disciplined them into becoming responsible and great young adults.

By getting the opportunity to even get an interview with the Capital One people, the new student bankers were appreciative of the real-life experience it provided.

“Even if I haven’t of gotten the job, I’m thankful I got to experience my first job interview because I learned a lot from it,” said Gallegos.

The student bankers will begin training throughout the summer and officially start their positions in the fall.