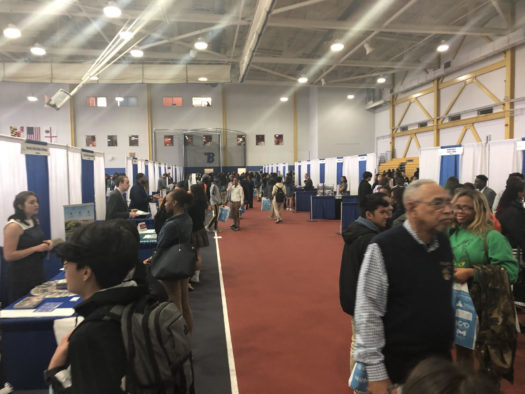 ▲
Students going around the venue exploring their options.
Ashley Vazquez

▲
Students going around the venue exploring their options.
Ashley Vazquez

Attention all juniors! The time to graduate is drawing near, and it’s time to start planning for the future. On April 5th, Parkdale juniors headed to the Prince George’s Sports and Learning Complex for a college fair.

Over 30 Colleges and universities, all ranging from different places like Arizona, California, Florida, and even China, were present for students to explore at the event. The venue was packed with students trying to visit all the schools displayed.

“I really enjoyed the college fair especially since that’s where I found the college I want to go there,” said junior Deja Hitch. “My favorite part was honestly the entire thing. I got to explore my different options from going abroad to staying in Maryland.”

To avoid feeling helpless or overwhelmed senior year, students would benefit from taking advantage of opportunities like the college fair.  It’s never too early to start looking into colleges, especially since there are many important factors, like the graduation rate, faculty ratio, good financial aid, internships opportunities, and tuition costs, that factor into a school.

“I would even tell sophomore to start looking into colleges now,” said Parkdale school counselor, Mr.Keys. “They can do the basic things by going to the website, finding out what major they  want to take and when they find that major, find out what’s the requirement.”

Juniors are starting to feel the pressure of starting to plan for college. Mostly juniors attending the college fair filled their bags up with as many booklets and as much information one could get at the fair.

“I’m really starting to think more and more about college since my sister is graduating this year and going to college after,” said Hitch. “I know as soon as she’s gone, all eyes  are going to be on me.”

According to U.S. Department of Labor, “about 16.3 million people age 16 to 24 were not enrolled in school” and “the unemployment rate for youth age 16 to 24 not enrolled in school, at 9.2 percent, was down by 2.0 percentage points over the year.” With many factors like not being able to afford school, little to no confidence in academic abilities, or unawareness of how to even pick a school can affect if one wants to continue school or not.

College isn’t the only route to take after high school, however. There are other routes to take, like a trade school, joining the military, start a business, and other options as well. Just because you don’t continue your education doesn’t mean you’ll be unsuccessful.

It’s never too late to go to a college, either, even if going immediately after high school doesn’t work out. Having a college degree has many benefits, including earning more money than with just a high school degree.

By attending the job fair, many students exposed themselves to a pathway that could lead to much success.

“College is fun [but] concentrate, ride it out for four years,” advised Mr. Keys. “Get your degree and then many more doors will open after that.”