Teen usage of e-cigarettes elevates higher than ever 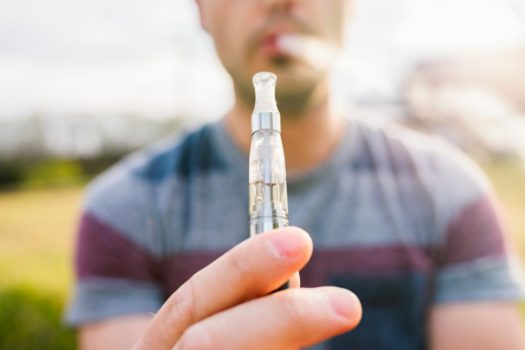 ▲
Propaganda and advertising could be leading causes of teen's usage of e-cigarettes.
Google Images

▲
Propaganda and advertising could be leading causes of teen's usage of e-cigarettes.
Google Images

The usage of e-cigarettes among teens has risen within the last few years. Many teens believe most forms of e-cigarettes are harmless although they still have cancer causing chemicals and nicotine in them. Teens who use a form of e-cigarette are very likely to start smoking traditional cigarettes not long after they began to use an e-cigarette.

In 2017, the FDA announced the results of the National Youth Tobacco Survey which stated that 1.5 million teens under the age of 18 have smoked some form of e-cigarette. In a 2018 National Youth Tobacco Survey, these results more than doubled to 3.6 million teens having used a form of e-cigarette; three million were in high school while the remainder still in middle school.

“I think [e-cigarettes] are still bad for you,” said sophomore Kaylah Oliver. “The fact that it’s making other people go to cigarettes is bad.”

According to drugabuse.gov, studies found that high school students who used e-cigarettes were about seven times more likely to report that they started smoking real cigarettes when asked six months later, compared to students who didn’t use e-cigarettes.

The reasoning behind this could be due to toxic advertising.  According to The National Institute on Drug Abuse (NIDA), seven out of ten teens are exposed to some form of e-cigarette ad.

“I think [e-cigarettes] are targeted towards teens because when your a teen your in the stage of [life] when you’re rebelling against your parents and you want to break the rules and stuff like that.” said Oliver.

In addition to ads, tobacco companies are taking the push to expose teens to e-cigarettes even further. According to the Truth Initiative, many e-cigarette companies are offering scholarships between $250-$5,000 that involves student to write an essay about some of the benefits or less harmful effects of e-cigarettes.

Although e-cigarettes have not been around long enough to determine what the long term effects may be, they can still be very dangerous because flavored aerosol is being inhaled, and the nicotine can be very addictive. A Truth Initiative Study found that 43 percent of teens only tried a form of e-cigarette because of its appealing flavors.

E-cigarettes can be very harmful to those in their youth, just like regular cigarettes can damage the lungs and development of the brain. According to the Centers for Disease Control and Prevention (CDC), evidence collected show that because youth are sensitive to nicotine, they can become more dependent on nicotine sooner than adults will.

While most believe that cigarettes only really affect the lungs, teens who use a form of e-cigarette can also cause damage to the brain. According to the CDC, there is a strong relationship in between youth smoking, depression, stress, and anxiety which can be very harmful to anyone who is already affected by these issues.

Because nicotine is highly addictive, especially to teens, it can make other drugs such as cocaine more pleasurable. The nicotine in e-cigarettes can also control a students attention and learning skills, causing mood-swings and aggressive behavior in teens.

“[I think teens use a form of e-cigarette] because they feel like it’s okay since their parents use real cigarettes,” said Oliver.