Roughly for the past decade, Parkdale’s very own Student Government Association has been one that’s created a substantial resume for itself. It has created pathways for students to succeed in various student leadership position on the county, state and even legislative level. To name a few,  students from the past and present, such as Juwan Blocker, former Prince George’s County Student Member of the Board of Education (SMOB); Ashanti Martinez, previous candidate for the Board of Education District 22 councilman; current Parkdale student Justina Blanco, 2018-19 Prince George’s Region Association of Student Government (PGRASG) president, and many more have been elected and appointed to positions within the two large levels of student leadership. 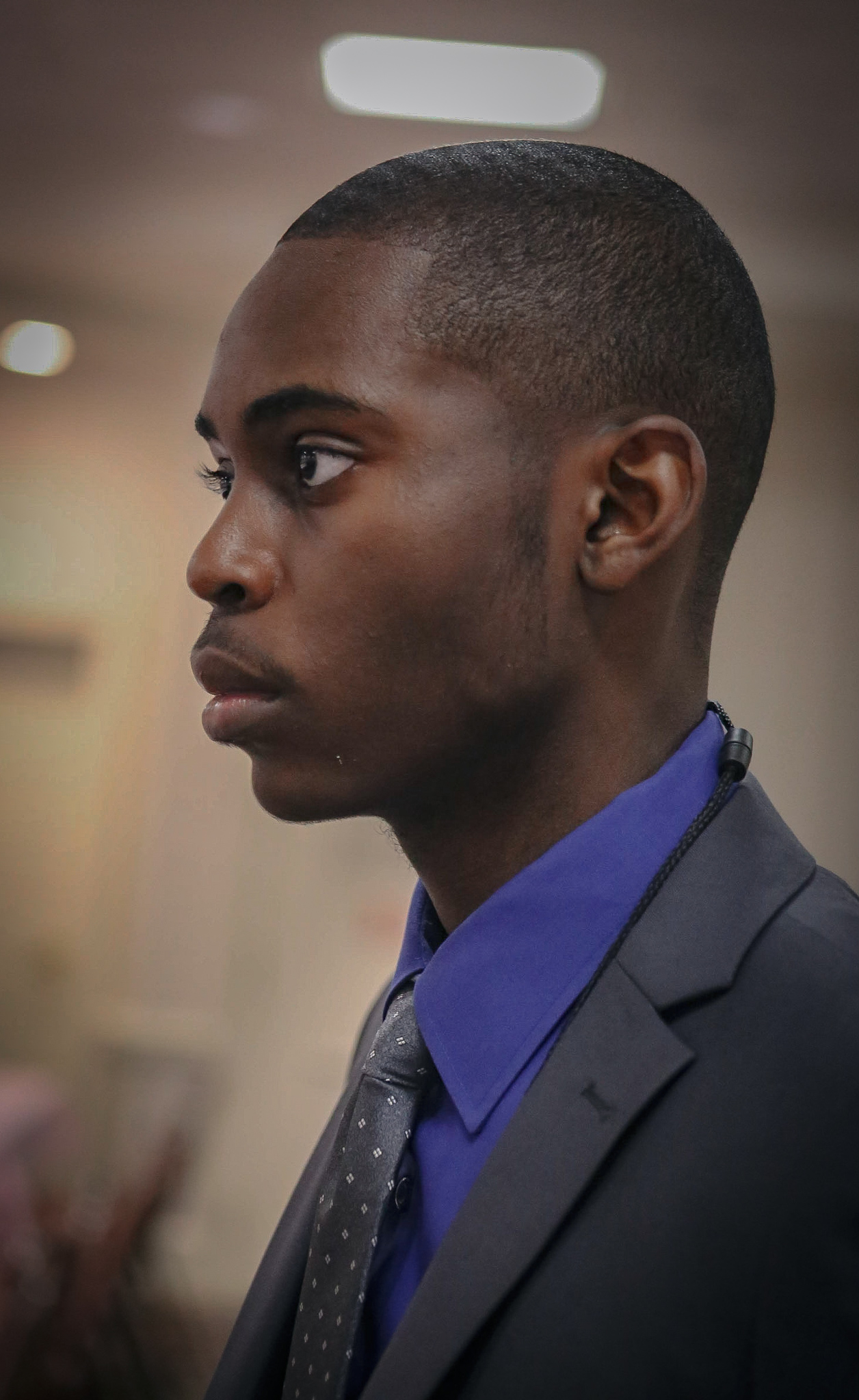 This group of esteemed student leaders now includes Parkdale junior Bryce Awono.  As a standard teenager who is apart of his school’s International Baccuralette Program, student government association and district champion mock trial team all while maintaining a 4.375 GPA, Awono was recently elected as president of the Maryland Association of Student Government (MASC) for the 2019-20 academic year.

Before winning his election, Awono served in many capacities on the state and legislative levels, as well as at Parkdale.  Some positions include freshman class president, the MASC Treasurer towards the closing of his freshman year, and the student member of the State Board of Education (BOE) for the 2018-19 academic school year. As the Maryland SMOB, he received full voting rights as a high school student and became only the third student ever from Prince George’s County to be elected to that position.

“You know, it is two different worlds,” stated Awono.“Working with the State BOE is working with a lot of adults and a lot of legislators to come up with solutions for everyone in the state of Maryland. When you are in with student leadership, like MASC president, it is peer interation, so it doesn’t change much from a standard SGA. It’s just a different level of student leadership.”

Awono was elected during the annual MASC Convention at the Clarion Fontainebleau Resort and Conference Center in Ocean City, Maryland from March 27th to the 29th. Throughout the course of three days, Awono and his campaign staff work tirelessly communicating with the delegates of MASC about his campaign platform and goals if elected as president.

“For all of my campaigns I don’t actually view them as campaigns […] it’s the first day on the job,” stated Awano. “ You’re basically on a three-day trial about what you have to offer over the next year so, it’s just the start.”

From hanging up campaign literature, such as posters and fliers, passing out various buttons and stickers, to posting on social media and having persuasive conversation with brand new people, Awono and his campaign staff played a schoolyard game of basketball during this campaigning season striving to get every vote possible. Bryce alongside of his campaign manager Alontae Elliott,a junior at Dr. Henry A. Wise High School and Chief of Staff of PGRASG mapped out all possible ways for them to be successful in this year’s election . 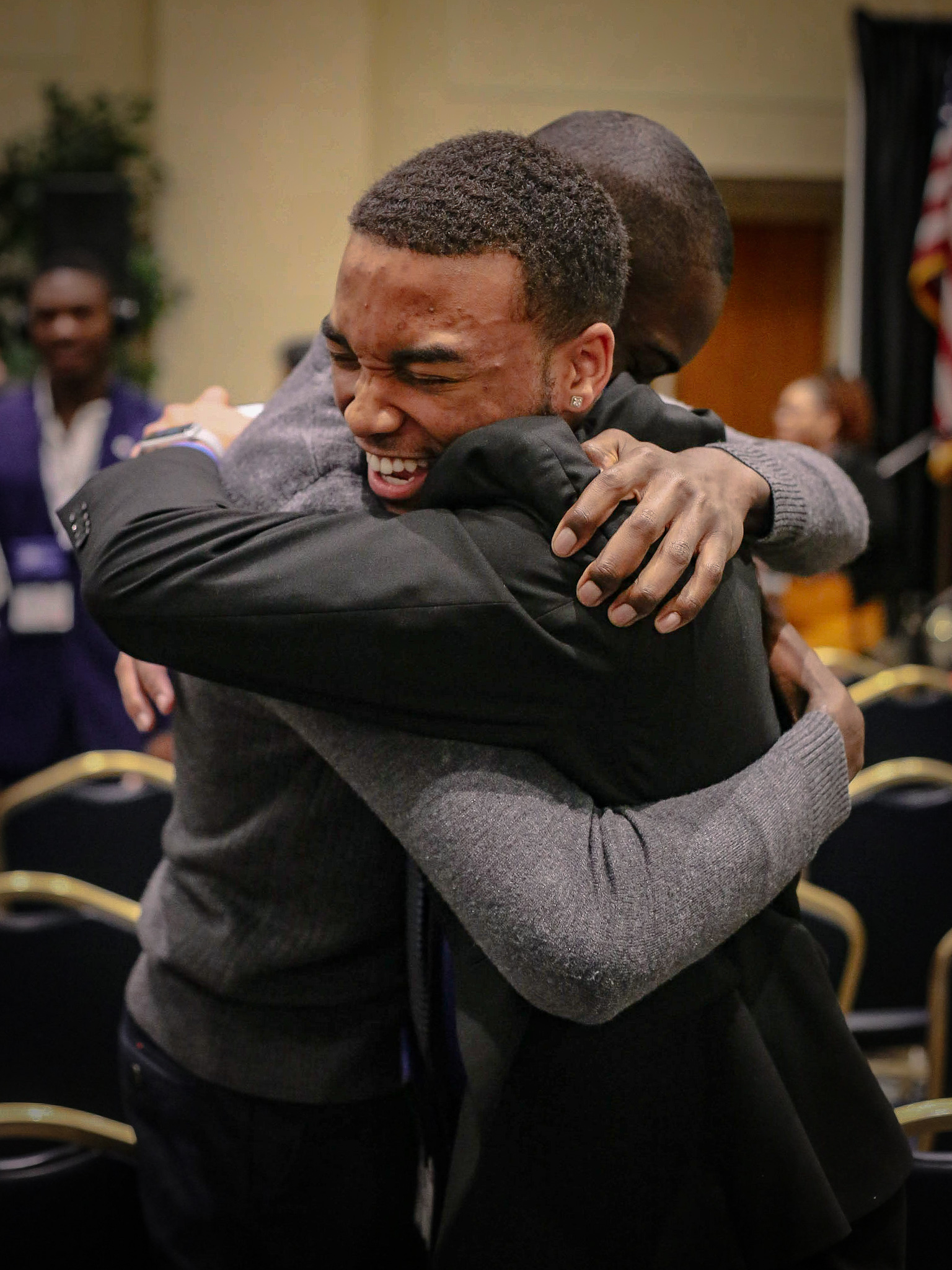 “I actually didn’t know I was going to be his campaign manager until just about two days while I was in the middle of packing when he let me know,” joked Elliot. “But he explained to me the platform and we discussed his plans and what he wanted to do […], as soon as we got [to Ocean City],we hit the ground running. The first thing he did was move his stuff into my room and the whole time, day and night, we went over every bit of his campaign, his outline, and his tactics.”

Awono ran against another student from Prince George’s County, Marisa Miles. Miles is a Science and Tech student at Oxon Hill High who ran for MASC 1st Vice President last year but currently serves as MASC’s Southern Divisional Liaison. Despite being from the same regional, both candidates ran separate campaigns with different middle school and high school students on their staff.

“I believe that Marisa Miles ran an amazing, and I mean amazing and strong campaign,” said Elliot. “I respect everything that her campaign staff stood for and did and their tactics were all throughout and it was a extremely close race the entire time. I can’t [speak] too much to what they did on their side because I didn’t ask those questions, but something we really emphasized on our side is that our campaign relied on the relationships we had on our team and specifically Bryce’s.”

Speeches, Q&A sessions and voting were all done in one day with the officer team results announced at the Award Ceremony. Rumor even says that the count for election was so close, votes were even being counted during the award ceremony. 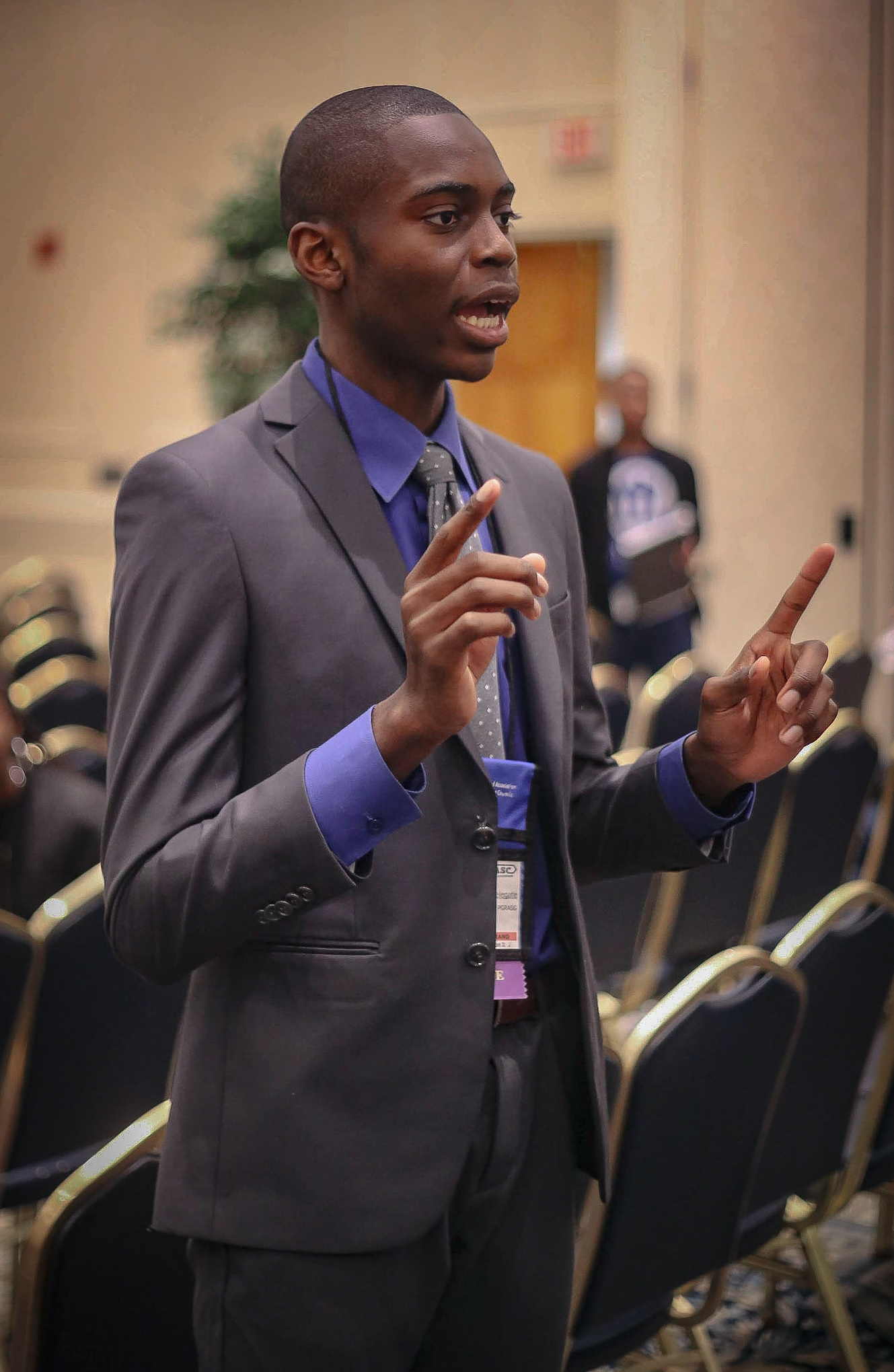 “It’s a very beautiful thing that we have a great officer team coming together who are a very diverse group of people [dealing with their regions], and next year we really want to set the tone for MASC,” explained Awono. “We want to make sure that MASC is on point for the entire year and really guide ourselves to be better for others.”

With Awono grasping this years Presidential Election, he now becomes the 70th president of the entire organization. He officially became the seventh person in Prince George’s County to hold the position and the third in the past decade (see chart).

Despite Awono holding this esteemed position, he will not only keep in mind the concerns of his home region PGRASG, but he will prioritize the concerns of the students of Parkdale and the community of Riverdale, Maryland.

“Definitely you know Parkdale being my school and also being here in Riverdale, it’s civic engagement,” he said. “Parkdale is definitely going to be on of my focuses over the next year. There are a lot of changes that I want to start up.”

Awono will be officially sworn in as president on June 1st at our very own Parkdale High School. Registration to attend is available through the MASC website. 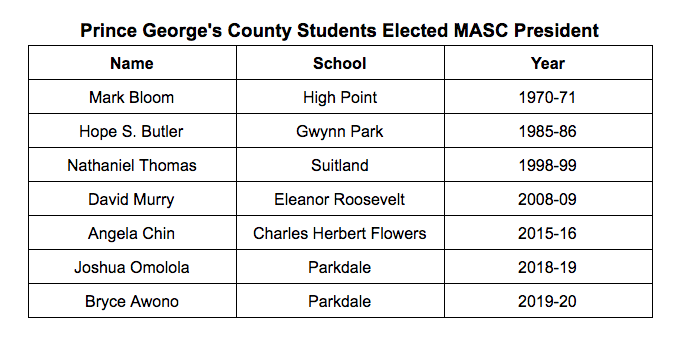 Seven PGCPS students have served as MASC President over the past 40 years, two of the most recent being Parkdale students.