“The Curse of La Llorona”: A flop 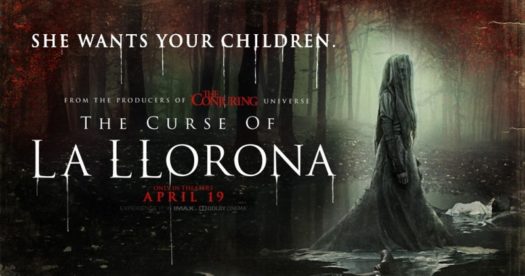 Horror films are supposed to be creepy, gorey, sending chills down your spine, and give you nightmares, etc. Yes, many of them are hard to watch and are intriguing because of the trailers, but please, don’t fall for trailers, because most of the time, those movies that look good and amazingly scary are the biggest flops.

That’s exactly how some felt when watching the new horror film, The Curse of La Llorona, or the weeping woman. Many may be familiar with the legend that is constantly told and used as scare tactics in Hispanic households.

The legend takes place in Mexico, and it’s about a beautiful woman who married a rich man, and they had two sons together. One day, her husband simply stopped loving her and left her for another woman who was rich. Shortly afterwards, the woman is walking in the woods with her sons when they run into their father who was with another woman. The father only speaks with his sons and ignores her completely, causing her to grow a hatred towards her two sons. She takes them to the river in the woods and drowns them. She later regrets what she did and cries for them… resulting in her drowning herself in the same river. That’s how she got the name the weeping woman because she wailed “Ay, mis hijos!” (Oh, my sons!).

Now, when seeing the trailers of the movie, you’d think it’ll take place in where the story originated, and stick to the actual plot of the film, but this was not the case. When reviewing the plot of the movie, it is said that it takes place in Los Angeles. Wait a minute, how on earth did La Llorona’s body travel from the river of Santa Fe, New Mexico to Los Angeles? It really throws you off knowing how Americanized the movie is. Not only that, but some actors and actresses of the movie were indeed Hispanic, but only some were fluent in Spanish. The acting wasn’t that bad but I feel it should’ve had a Spanish script instead of being fully written in English. In other words, the movie should’ve been more cultural-based.  What would have made it even better is if it was more of a documentary, just like The Blair Witch Project, since it wasn’t scary at all.

The movie was pretty much predictable with barely any jumpscares; and the ones that were there weren’t that scary. The make-up for La Llorona was a big mess. It looked like as if she was your next door neighbor dressing up and putting on smeared cheap makeup from the dollar store to scare you for Halloween while trick-or-treating.

The film wasn’t completely terrible. In some aspects, it was interesting because it makes a minor connection with the biggest horror movie franchise of this generation, Annabelle, but only for a scene. You also got to learn more on Santeria, which means “Worship of Saints”. It’s like witchcraft but used in a good way instead of summoning something bad. Again, the movie would’ve been better if it was just documentary based along with more cultural based as well, maybe writing the script in Spanish would’ve made the film 10 times better.

At the end, everyone has their own opinion. Why don’t you give it a chance and see what you think? I hope you won’t be as disappointed as many were.