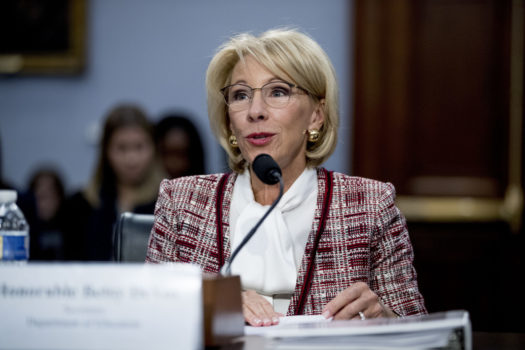 In March, Education Secretary Betsy Devos proposed substantial budget cuts to the Education Department for 2019 fiscal year on behalf of the Trump Administration. With Secretary Devos’ proposed $7.7 billion cuts, its numerous special education programs around the country would take some of the hardest financial hits, stripping them of opportunities that the money provides.

The proposed budget is threatening the elimination of the Special Olympics funding, which amounts to $17.6 million, $7.5 million from the National Technical Institute For the Deaf, and a $5 million dollar cut from the American Printing house for the Blind who produce books for blind students. Even at the collegiate level, Gallaudet University in Washington D.C. is looking at a $13 million cut for its deaf and hearing-impaired students.

With Parkdale having the largest special education program in the county, these proposed budget cuts could affect many Parkdale students, whether they’re in the program or not.

Parkdale has 375 students enrolled in the special education program, with its students varying from those with noticeable physical/mental impairments to students who would go unnoticed in a general education classroom setting.

In actuality, those “services” that these students receive are more inclusive than most would think. In many cases, students with services have an assigned teacher with them in a classroom who wouldn’t just be there to help that identified student but to support everyone in that classroom. Cutting funding from the special education program could be detrimental to co-teachers in classrooms, which could be harmful to many.

“If, for example, you’re a general education student not receiving support but you’re in one of those classrooms that has that two teachers then you’re also benefiting from having that second person in there, so you might get more access one-on-one to a teacher or if you’re struggling, you might get added support,” said Ms. Summerlot.

Losing federal funding is devastating to any school’s budget and ability to spend its money where it’s needed. In the case for Parkdale’s Special Ed program, it would truly affect almost everyone. Although there is a separate budget that comes from the state designated for special education teachers, even that budget is at risk since some of the money comes from the federal government.  The risk of that budget decreasing would affect the program in its entirety.

“If the programs were cut such that there wasn’t enough money for speech language pathologists, occupational therapists and physical therapists, all those people who provide supplemental services, we would really struggle to meet the means that allows those students to be in a mainstream, with their peers, general education environment,” said Ms. Summerlot.

Fortunately, Secretary Devos’ proposed 11 percent cut to the Department of Education budget not only got rejected by Congress but an additional $71.5 billion–which is more than $581 million from the previous year– was added to the department’s budget.  However, that doesn’t mean that all is now good in the financial world of public education.

A majority of funding for special education programs around the country is due to Part B of the Individuals With Disabilities Education Act (IDEA), which is a federal law designed to help the needs of students between the ages of 3 to 21. In 1975, when the act was passed, federal government pledged to pay 40 percent of the average per student expenditure for special education. Not only have they failed to meet that pledged amount, but the current funding per student is 14.7 percent.

“They’re not just the students you can clearly see are struggling or who are behind, but they are also the kids who are setting the curb in Calculus classes, who are performing well in AP Literature,” said Ms. Summerlot. “They are students first, and people with disabilities second.”