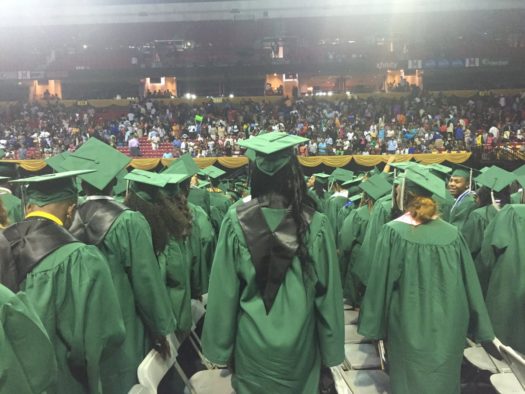 In recent years, PGCPS has changed its policy on graduation attire to keep cap and gown colors gender neutral for transgender and other LGBTQ+ students to have a safe, welcoming space.

The Parkdale graduating class of 2016 doned all black caps and gowns and since then, both male and female students have graduated in green gowns with gold sashes.

There are some who think that switching the color of the gowns  is breaking tradition, but when it comes to priorities in school-related activities and celebrations, having a safe welcoming space for all students should be more important than the “tradition” of boys wearing one cap and gown color and girls wearing another.

It shouldn’t matter if the color changes to one for all if your still getting a diploma for accomplishing high school. Graduation is suppose to be a place where everyone comes together and celebrate instead of debating the colors for graduation.

More and more counties and states, like Montgomery County and Virginia, are joining the movement of having gender neutral cap and gowns.

However, there are still some schools within the DMV area that don’t follow this policy, due to them being either a private or a charter school. One example of this is Don Bosco Cristo Rey High school. Their cap and gowns are black for boys and gold for girls.

“I would say that’s breaking the tradition [if all students wore the same color gown]. Our school colors are black and gold,” said Don Bosco junior Alondra Rosa. “We’re a private school. A catholic one at that. I like how our school is set up. It feels home-ish like.”

Many others feel this way as well that switching to one color for all will break tradition making students and parents upset. One case of this was Howard County, where, as recently as 2016, many parents were upset that the county broke their tradition to accept this new one. According to a news article by …, outraged parents said that “forcing gender neutral causes animosity instead of promoting diversity.”

However, the National Center for Transgender Equality found that 75 percent of transgender youth feel unsafe at school and those who are able to persevere had significantly lower GPAs, were more likely to miss school out of concern for their safety, and were less likely to plan on continuing their education.

Making transgender students feel safe in school should be a top priority since so many might not be accepted in their homes for being who they are, especially during graduation. A place where everyone comes together to celebrate the end of their high school years.

Schools have a policy to not discriminate anyone due to their race,color, sex, age, national origin, religion, marital status, sexual orientation or disability.