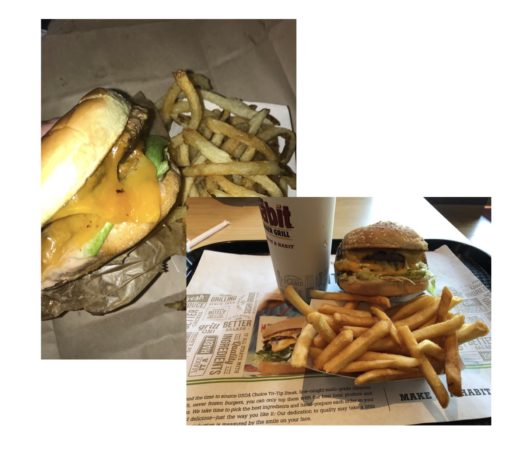 May was burger month and a perfect excuse to eat burgers. Luckily for you, we reviewed some common burger joints to save your taste buds. We are rating these burgers out of five categories: Place, Time, Taste, Price, and if we would go again/worth. 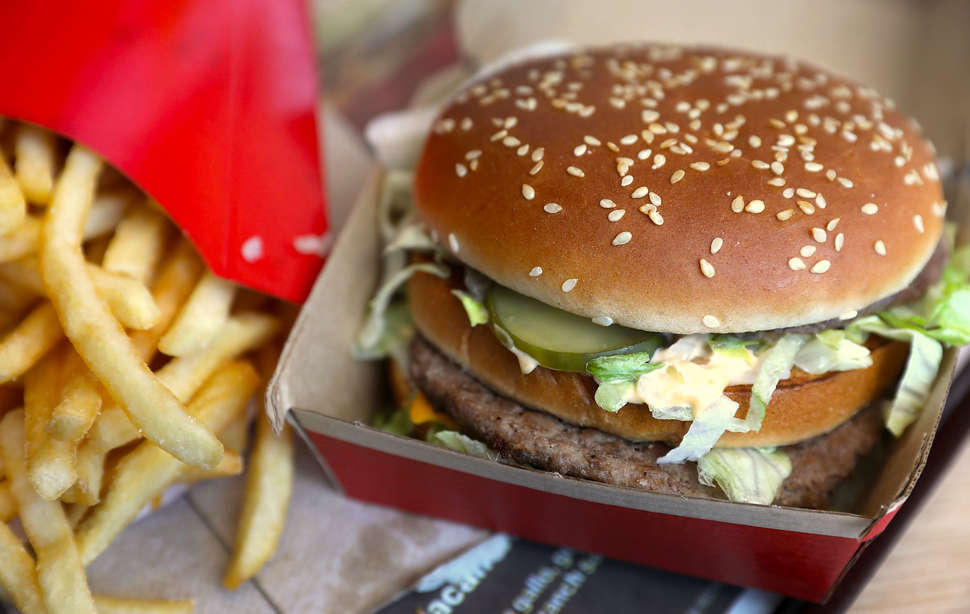 I  had the famous Big Mac. McDonald’s isn’t the worse place, but it does feel like a rush placed, where you have to eat fast and get out. It took about 10-15 minutes for my burger to be ready which isn’t that long for a busy place. When I got the burger, it looked messy. It had shredded lettuce which was everywhere but on the actual burger. The taste was pretty much the same as a regular burger, just way messier. The burger itself costs about $4, but the meal cost about $10, which isn’t bad at all. I, personally wouldn’t get the burger again. I wasn’t really a big fan of it like your one dollar burger taste better. I give it a 2 out of 5 stars. -Zenaida 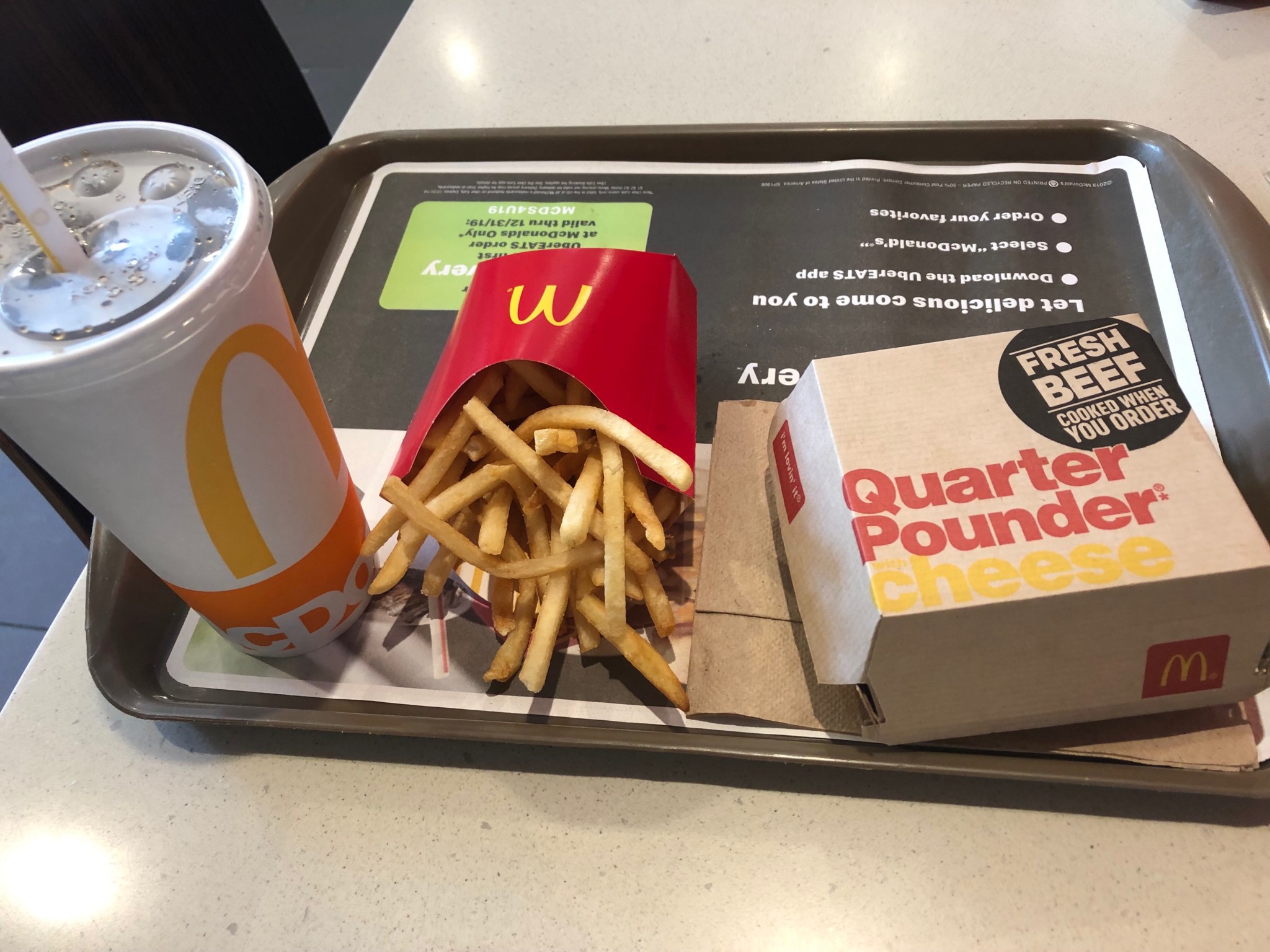 I tried one of McDonald’s classics, the quarter pounders with cheese. McDonald’s is a good place to have a fast lunch or breakfast. It’s affordable. My order was made quick and given to me in about 5 minutes. The burger itself was not too big, not to small, but the perfect size. The burger had cheese, pickles, onions and ketchup with mustard. The onion pieces were cut too big and it overpowered the burger. The burger itself is pretty heavy. Just one is enough to make you full for the rest of the day. It was very simple with not very many flavors popping out other than the onion. The price for a quarter pounder alone is about $4, which is very affordable for what you get. I would eat it again. I give this burger a 3 out of 5 stars.  -Ashley 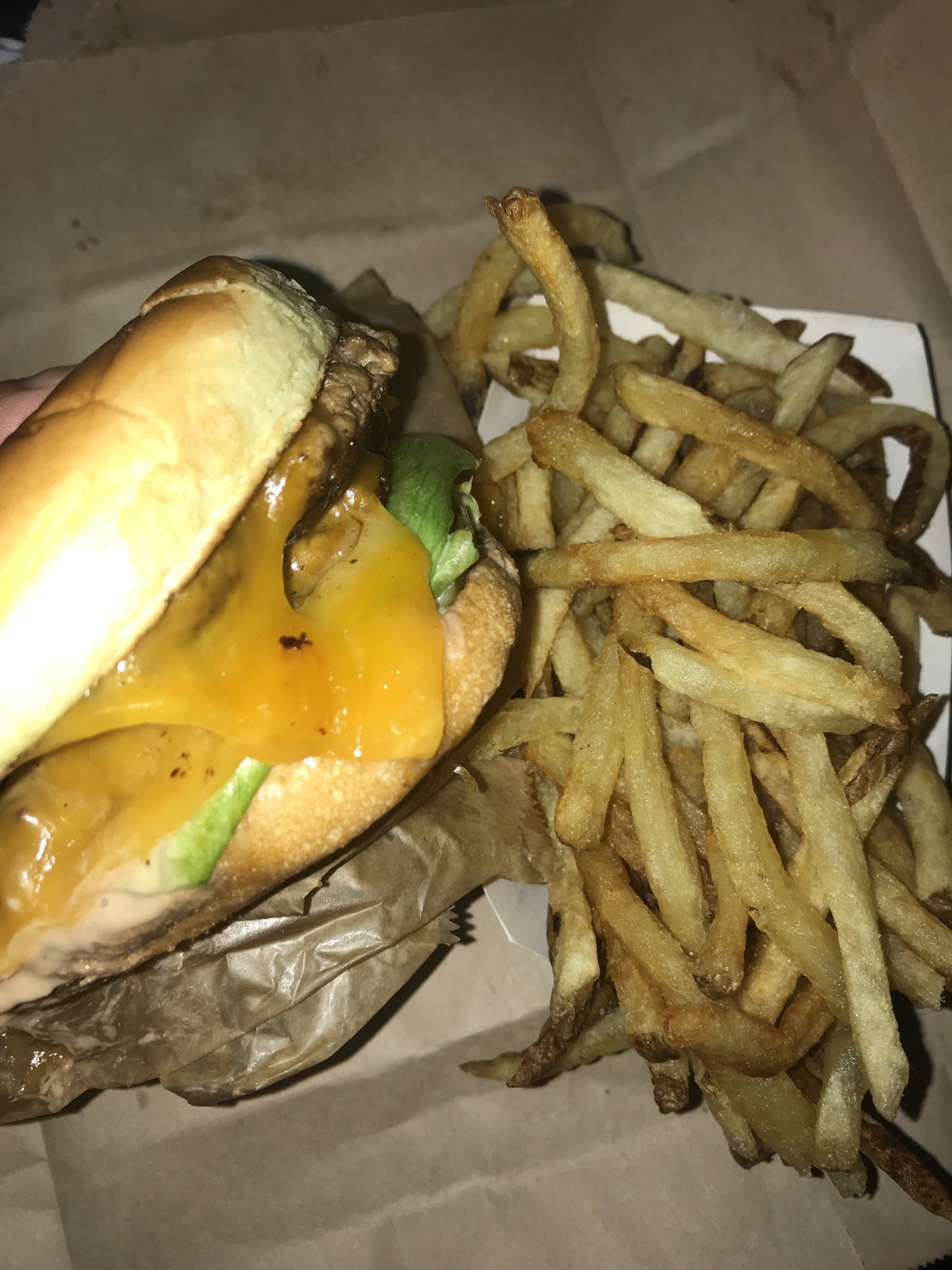 I walked in this place, and it gave me a good vibe. This is an actual place you can hang out with your friends and take your time eating either indoors or outdoors! The burger I got is called “The Original” and took about 10 minutes to get ready (maybe even less, it felt really fast). This burger was placed in a little bag so you wouldn’t get your hands messy, which I found so cool. The burger was messy but a good messy. It looked good and tasted good, way better than the Big Mac. The only downfall was that their special sauce was at the bottom which made the bottom bun soggy causing it to break, but it still worthy. The price for the burger alone was about $9, but the meal was $16 (only because I got the milkshake which is almost 5). I would definitely go again to this place! It’s worth my money. I give it 4 out of 5 stars. -Zenaida

When I went to Elevation Burger, it was very quiet. No one was inside except the workers. The place is nice and cozy. It is located in a fairly nice area. The restaurant appears to be very involved with the community. They have an art wall for the kids and a bookshelf where you can grab a book in exchange for bringing a book. They have pictures of different families and a wall that you can write on using chalk where many people write positive messages. A plus side is the restaurant had many vegetarian options compared to other places. I ordered the “paleo burger,” which is a burger wrapped in lettuce instead of having buns. The burger had tomato, guacamole, bacon and two patties. It was a new healthier spin to a traditional burger. The lettuce was very messy. I didn’t know how to hold it without everything falling apart. The bacon didn’t really add as much flavor as I thought it would. The guacamole didn’t taste like guacamole, but instead, it just tasted like avocado. That wasn’t necessarily bad, but I mean instead of saying guacamole they could just say avocado. The lettuce was a lot to handle. I think it was too simple and needed an extra kick, like a signature sauce. It wasn’t greasy at all and felt fresh. The price was a little high in my opinion for what I got. The restaurant doesn’t have combos, and the burger was almost 10 dollars for basically just lettuce. The drinks were expensive, almost $3  a regular cup when at other places it’s like one dollar. The place is not as affordable but still very nice. I would rate it a 2 out of 5. Next time, I’ll try a different burger. -Ashley

THE HABIT: MAKE THIS YOUR NEW BURGER HABIT 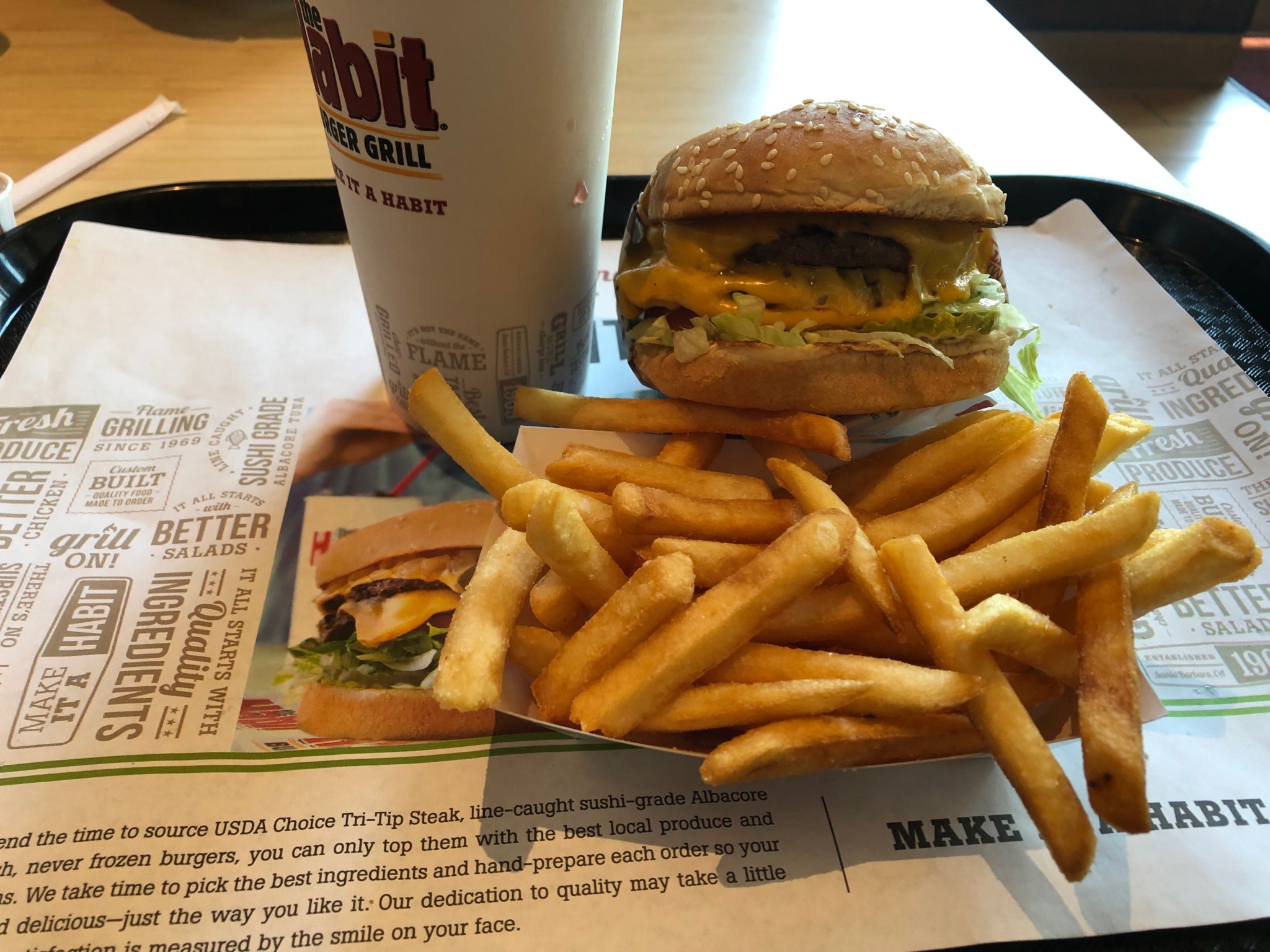 I walked into The Habit, and it was very clean and bright. I ordered the double Charburger with cheese, also known as the number 2 if you want the combo. The service was fast. The restaurant has pagers which buzz when the order is done. The restaurant is fast food but better quality. The portions were bigger, and the burger itself was one of the best I have tried. The meat was nice and seasoned, the cheese was melty, and the patty was fresh out the grill. The burger had the typical toppings lettuce, tomatoes,  caramelised onions, pickles and mayo. The restaurant also had a little jalapeño section for those who like to add some spice to their burger. The burger was very good quality for the price. Although the burger had a little too much mayonnaise for my liking, it was still good. The restaurant had unique drinks like Cucumber citrus and Tropical tea. The restaurant has good quality and low prices. It is very affordable. I would rate this a 5 out of 5 stars. I would definitely go again. -Ashley 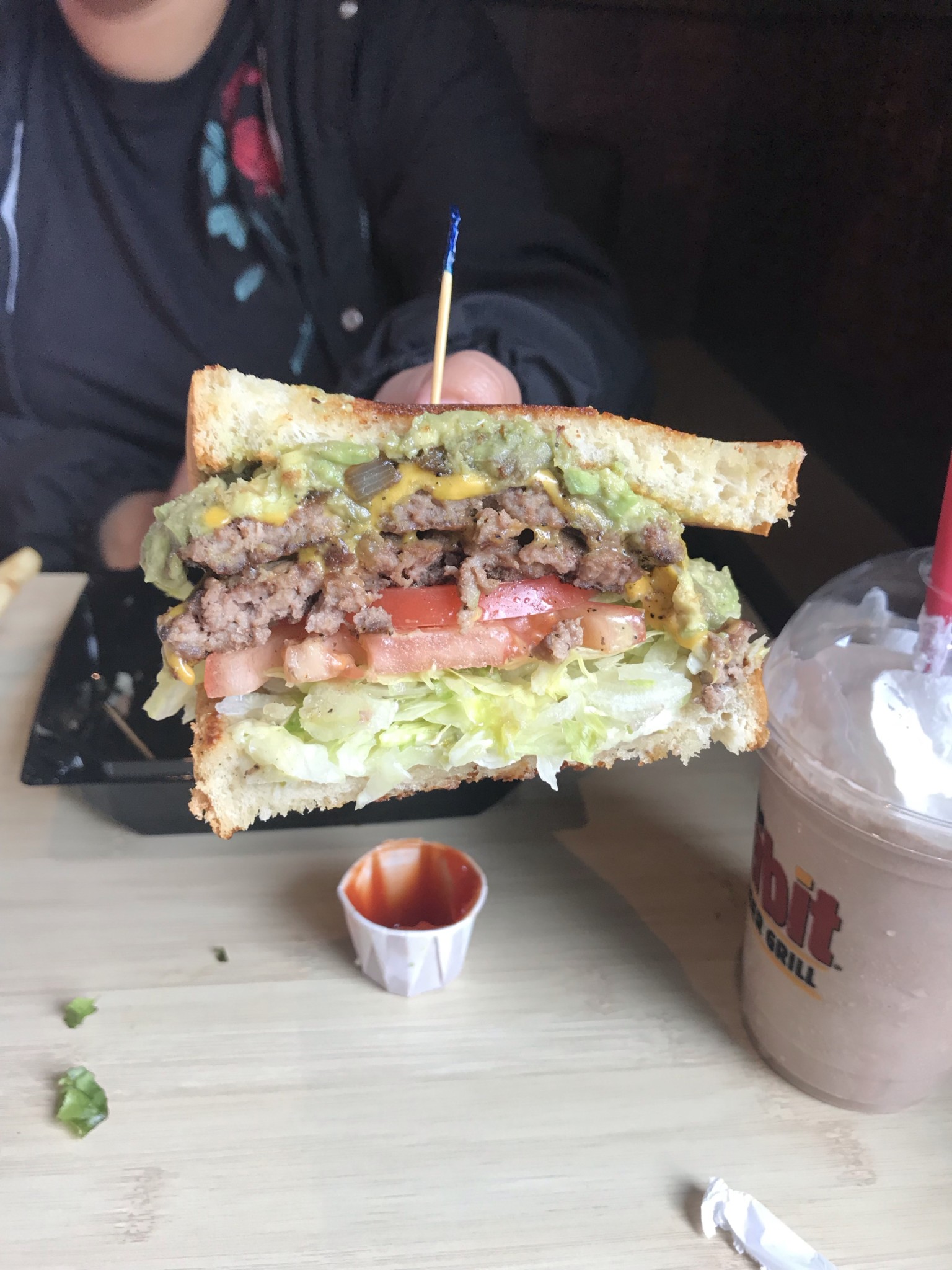 When I walked into The Habit, it was nice, cold, and big. It’s like a better version of a fast food place. It was mostly empty when I went, so I got my order pretty quickly, about 10 minutes. I had the Santa Bárbara. It’s a burger that has sourdough bread instead of buns and has grilled avocado and double patties as well. The burger was huge. I could barely finish the second half. The cost of my order was around $14 with the meal, but it was worth it. The burger was amazing, but everything kept pushing out of the burger and juices kept falling as well. I would totally go again to this place with some friends. The setting and vibe of this place are good just make sure to bring a light sweater; it gets pretty cold. I give this burger 4.5/5. -Zenaida

We had an amazing time trying out burgers and going to places we have never gone to before. Although all of the burgers had a unique taste and spin on a traditional burger, our favorites were the double Charburger at The Habit and The Original at Elevation Burger. Now go spend this summer, stuffing your face with burger goodness!