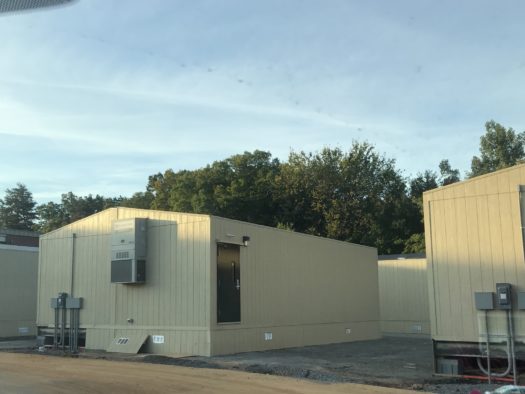 Beginning in the 2019-2020 school year, Parkdale has added four additional portable classrooms, best known as “temps” to its campus.  Although the new additions could mean smaller class sizes, some students are not too thrilled about the new rooms.

“People sometimes gets too cold or too hot [in the temps],” said sophomore Wendoline Domingez-Ortega. “[Students] sometimes can’t focus on their work because it’s either too hot or too cold.”

Some students in the temps experienced a time where the heater didn’t work during the winter months. The teacher had to bring in her own heaters to try and make the classroom more bearable. In times, the whole class would have to be moved to the inside when the classroom were way too cold.

In addition to inconsistent temperature, the temporary classrooms also at times experience slower WiFi and questionable safety conditions on the stairs and ramps.

This difficulty of getting up the ramp can get worse with iced up or wet stairs and ramps, which cause a hazardous environment for students. Many times students almost slip or end up slipping, which not only cause them pain, but also humiliation.

While not many, the addition of the new temporary buildings have also eliminated roughly 10 to 15 staff parking spaces, which has caused more staff members to park in the back.  It also eliminated the bus lane, causing a slower flow of traffic during the morning drop-off hours.

Despite the issues with temps, they do help in overcrowding in schools. Imagine Parkdale without the temps. Many teachers would have to float around and have classes in places like the cafeteria, library, or the gym, or students might have to be in an even bigger classroom perhaps 40 students to one teacher.

“I like the temps because I found as a floater last year,” he explained. “The air temperature would be different in [the] different rooms [I floated into] like very chilly in one or very warm.”

Unlike the different temperature in the main building, which has been experiencing issues of way too hot or entirely too cold, the temps appear to be regulated by the teacher as there is a thermometer in each room.

However, the location does seem to still pose a problem and will particularly and even more so with the new temporaries that are quite far from the front entrance of the school.

“One problem is the bathrooms, having to let them go outside and come back takes them a while,” said Mr.Butsavage.

It is unclear when the newest temporary classrooms will be completed for classroom instruction.