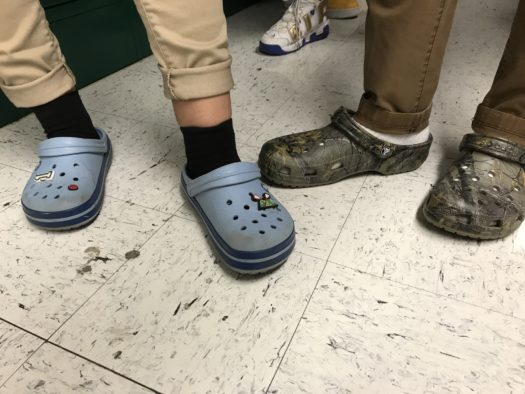 ▲
Some students can still be seen wearing Crocs despite administration's push to ban them.
Nicholas Seecharan

▲
Some students can still be seen wearing Crocs despite administration's push to ban them.
Nicholas Seecharan

Authority figures in the school setting often say that everything they do is in the students best interest. However, this came into question after a new ban on Crocs was made at Parkdale.

Rumors spread the halls about a new rule that would soon affect the lives of many students: no more Crocs. While students suspected there was a change in policy, worry and frustration didn’t grow until Parkdale principal Dr. Graves Henderson made an announcement confirming the haunting new rule.

This change seemed to be the last straw for many students, as they felt their opinions were left out of the rule that affected only them [students].

“They do this all the time,” said senior Priante Nkunda. “They just make rules and don’t take into consideration how we’re [students] going to feel about it.”

Regardless of the rule being put in place, some students are still wearing their Crocs. The students’ decision to revolt seems to be going well mainly due to the lack of enforcement. While some are letting students slide, others have been heard saying that they expect students wearing crocs to “find shoes” before entering the classroom.

This ban, along with rules made about what students can and cannot wear, results in disturbed instructional time because students feel that their choice to be comfortable in their learning environment isn’t respected.

“[Teachers] kick me out of class and put me in ALC all because I don’t have an ID or I don’t have on a shirt with a collar or I’m freezing and have a hoodie on but they say that my education is their first priority,” said Nkunda. “How, when you’re taking me out of class because of petty stuff?”

Some students questioned authority about the new rule, asking who they were really trying to help and most responses given were that this new rule was put in place because of “safety reasons”.

However, some students don’t feel as if the response is adequate enough.

“Crocs are safe!” said junior Christa Jackson. “They just wanted another thing to take away from us, so that they could flaunt their superiority and remind us that the power in the building isn’t distributed equally.”

Jackson also noted that “staff wear open-toed and open-heeled shoes all the time but nobody tells them it’s a safety hazard.” She feels the Croc ban, and other policies like it, are unfairly given to students simply because they can’t do anything about it.

Many students stand with Jackson and her belief that the abuse of power throughout the building has carried on long enough, and that the ban on Crocs is just one of the many examples of the claim.

Although mostly negative, this simple rule created a positive voice within the students that they weren’t aware was there.

“Before I wouldn’t have given my input on the situation, but they really don’t listen to us and honestly they’ve never listened to us,” said Jackson. “I’m tired of them making decisions about us [students] without us. So now I want my opinion to be heard.”