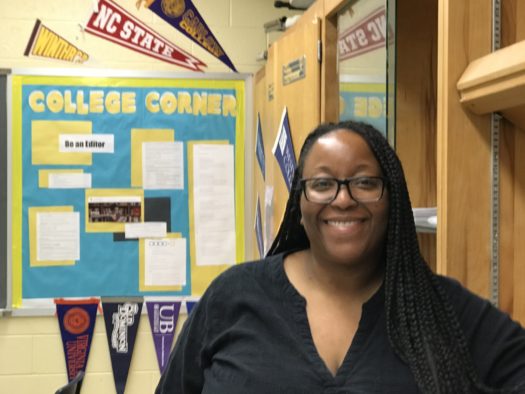 This school year, Ms. DeAndrea Johnson joined the Parkdale English team after working as an editor since 2005.

Although she is only two months into her first teaching assignment, Ms. Johnson is already noticing some similarities–and also big differences–between this job and her former position as an editor for Civil Engineer Journals.

“[The two are] alike in the realms of evaluating like looking for certain elements,” said Ms. Johnson 12th grade English teacher. “The talking all day is much different [and] it’s a lot more energy I have to exert.”

Although she was an editor for more than a decade, her love of helping others made her change her career path.

“I became a teacher because I want to help steer the lives of young people in a way that will foster success,” said Ms. Johnson. “Whatever wisdom and knowledge I have, I want to share it with young adults.”

Her stepmother was also a big part of Ms. Johnson becoming a teacher.

“My stepmother is a teacher so I get more tips from her and she is very encouraging,” said Ms. Johnson.

Before coming to Maryland to attend Towson University where she earned her master’s degree in instructional design and development, Ms. Johnson is originally from Illinois. She describes her hometown and Maryland to be noticeably different.

“People are more laid back [in Chicago], I think,” she explained. “Not everything is a rush and I think their mentality is a little different [whereas] here more people are focused on getting ahead.”

In addition to teaching about literature, Ms. Johnson also helps her students advance in life using her knowledge and real-life scenarios.

“I think she’s a great teacher,” said senior Christian Zambrano. “I like how she uses analogies and connect[s] her ideas and lessons.”

Although this is her first year teaching, her ways of creating curriculums got her nominated for a teacher excellence award. This award is for using the experience that is learned in the program.

Although she did not win the award, it let her to winning a new family: The Parkdale family.

“I think Parkdale tries to foster a family environment mentality and wants to push for success in their students.”

Although the year is just getting started, she has big hopes for this school year and wants success for not only herself but for her students.

“[I hope] that I will see a change in at least one student that they approached or developed a love for writing as much as I do,” said Johnson.