Mighty Panthers’ losses could be caused by more than players’ skills 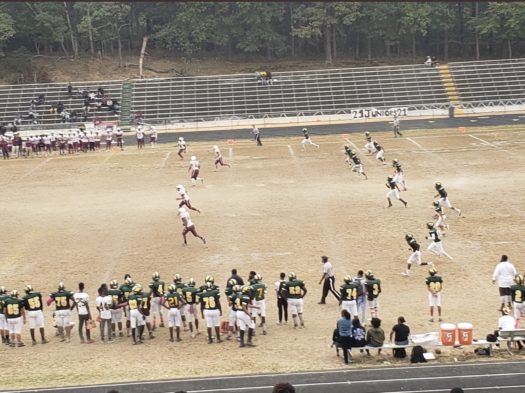 ▲
The Mighty Panther are forced to play home games on a field with no grass.
Parkdale twitter

▲
The Mighty Panther are forced to play home games on a field with no grass.
Parkdale twitter

The Mighty Panthers have gone through many losses over the years– although we did see a win during this year’s homecoming game against the Bladensburg Mustangs with the score  14-0 (go, Panthers!). However, compared to the amount of losses they’ve suffered before, what possible reasons have impacted them?

Having a decent field could greatly contribute to the more promising success of the Mighty Panthers. Imagine playing a game on pure concrete. Once someone tackles you down, you’ll be going straight to the hospital. The fact that the Parkdale field is just dirt and barely has any grass is an issue that could not only be affecting players’ game but their health, as well, if the dust gets into their eyes and noses. The county has yet to take a step to help fix the field or maintain it.

The fact that not even the other teams want to play here is a huge problem and also embarrassing and remains upsetting that the hard working football team can’t be shown on the field.

“It disappoints me because you can go six miles to our west to Flowers High School, [and] they played in a totally different environment and if you go five  miles to the north to Roosevelt, they [also] play in a different environment,” said athletic director Coach Moore. “It’s not like you’re talking about people that live in a different state. You’re talking about people five miles away and then four miles away, you got Northwestern [who] play on turf.”

Not only is our field is lacking, but so is our team spirit and support for the team. There hasn’t been enough people showing up for their games or enough support from other students or staff in our school.

“ I don’t think we get enough support for our football games in general,” said Coach Moore. “I know that we play on Saturday’s afternoon for football and that’s a tough time to ask for people to come back to the school to support a football game opposed to a game being on a Friday night [since] you know after school because kids love to hang out here in school anyway and it’ll be nothing for them to walk out back for the football game.”

Football is the main face of high school, and it’s sad that the team’s aren’t recognized or unappreciated when they work hard everyday.

“We dont have alot of support and I’m being honest. Not a lot of people come to the games, that needs to change [because] the whole school [here] is like a family.” said Senior 20’ Carlvainsky Decius,  quarterback of the team

We should be able to cheer on the football team and help motivate them. We should have special events such as pep rallies before a game to let them know that we’re on their side!