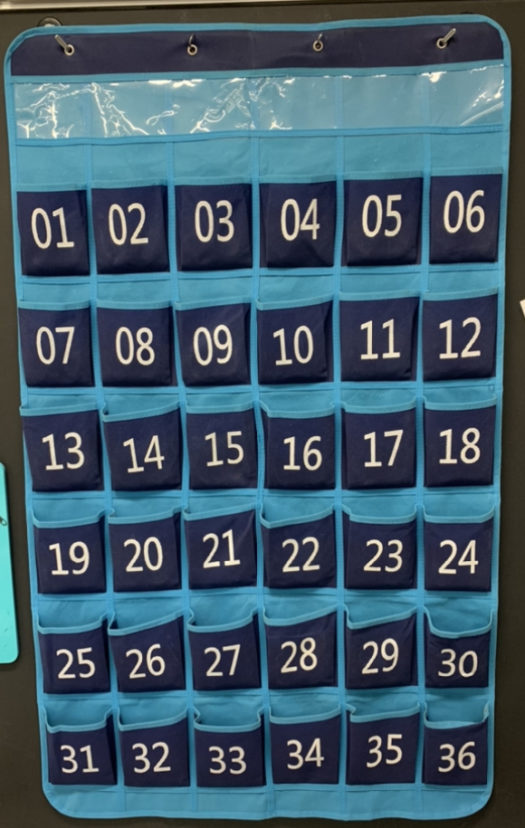 ▲
Students can put up their cell phone in Mrs. Upsher's holder during instructional time.
Neziah Osayi, '20

▲
Students can put up their cell phone in Mrs. Upsher's holder during instructional time.
Neziah Osayi, '20

In today’s society, it seems like most people can’t go anywhere without their phone attached to the hip. Especially with teenagers, they’ll take their cellphones with them everywhere they should and shouldn’t, including the classroom.

There’s been a seemingly long debate on whether cell phones should be used for instructional purposes, let alone whether they should present in class at all. As of 2018, 95 percent of teenagers in the U.S. have access to a cell phone and that number of ownership has been surging every year.

With that surge in ownership comes the inescapable result of teens bringing their loud, vibrating pocket-sized distractions into their learning spaces. At least that’s how many people would like to portray cell phones’ contribution to the classroom.

With cell phones’ countless educational websites and resources comes access by students at virtually anytime, but that’s not what’s normally happening in classrooms.

Back in 2010, the Pew Research Center found that 65 percent of teens brought their phones to school despite any bans that may be in place. It’s also been found that students are spending up to 20 percent of their in-class time texting, emailing, and checking social media.

For many teachers, that growing number has become more of a nuisance than a new learning tool in the classroom.

“I think that cellphones are a big distraction for kids,” said math teacher Ms. Yates. “I do sometimes use them for educational purposes, but then I have to monitor them a whole lot because kids will get off-task and [start] doing what they want to do instead of what they’re supposed to do.”

With the seemingly infinite list of attention-seizing social apps like Instagram, Snapchat and Twitter, students would certainly find their feeds more interesting than this week’s math lesson. According to Common Sense Media, teens averag nine hours online, much of which obviously conflicts with their class time since they are in school for roughly seven hours.

“I do believe that cell phones are a big distraction,” said senior Mimi Nguyen. “We’re conditioned to want to be on our phones and that’s why I think it’s important to set and enforce rules.”

Schools around the world, in countries like the United Kingdom and France, have all out ban on phones in the classrooms. In the U.S., there’s no nationwide ban on cell phones, but  in states like Michigan and Wisconsin, phones aren’t only banned in the classrooms, but in the hallways and at lunch. Students can make emergency calls to their parents in the school’s offices and if caught using it anywhere else, their phones could get confiscated.

For some, a ban might not be the worst idea since cell phones don’t just serve as a distraction, but also a tool for cheating. With students being able to find the answers to worksheets, entire textbooks and basically anything that is taken from online, the answers are at their fingertips.

“I see a big problem of cellphones in the classroom regarding math,” said Ms. Yates. “Instead of doing the work, kids want to use Photomath or some type of math apps to find answers.”

Some people may not want to ban phones at all and believe that phones can be used as just another resource for the classroom.

The way that Mrs. Upsher deals with cellphones in her classroom is quite unique compared to many other teachers in the building. She has students voluntarily put their phones in holders in front of the classroom for the instructional period. Once she’s done teaching, students are free to grab their phones and can even earn extra credit for putting their phones away.

“If you are not engaged in the learning process and you are on your phone, you are not going to understand the skills that are being taught,” said Mrs. Upsher.

Even having a system where there is a separation of the phone and the student, Mrs. Upsher still involves the phone in her classroom. For one thing, after the instruction part of class is over, students have the last half hour of class to make the responsible choice of doing their work or being on their cellphones for an easy 30 minute “academic distraction.”

“I try to find games, activities where students can use their cell phones for the learning aspect of it,” said Ms.Upsher

She has created a more controlled environment for cellphone where they’re not praised and do not hold all the focus, but they’re not demonized either.

With all that’s encompassed in a cell phone, it can be quite the distraction from student learning. They can be loud, ringing machines that “require” students to look at them every few seconds while on the other hand, they can give students access to Khan Academy, IXL, Quizizz and other educational resources they might not get to due to the lack of a computer.

Just like the people who use them, cell phones are very complicated objects that shouldn’t be considered inherently good or evil. They’re more like a tool that is only as good as what people use it for.