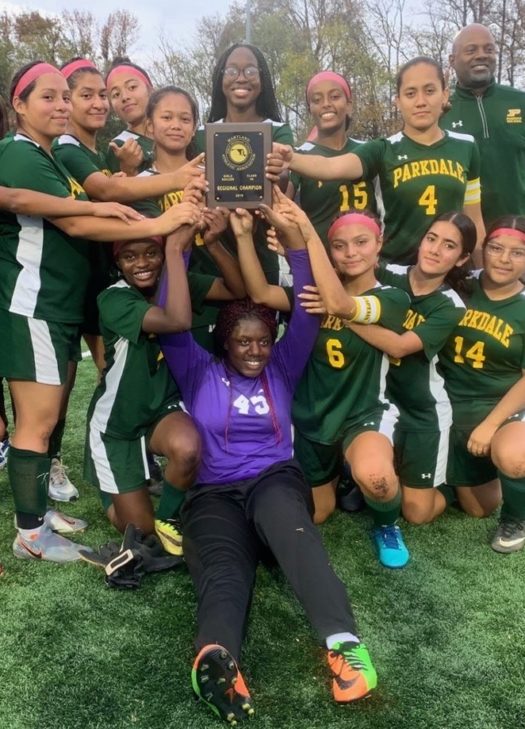 The girls varsity team at Parkdale dominated the field this season with an overall record of 10-1. On Tuesday October 29th, the team made regional finals and won with a score of 2-1, crowning them as Regional Champions.

While juggling their school work and their outside lives, the team found a way to practice everyday after school from 3 to 6pm, practicing, running drills and getting ready for their games. All of their hardwork and dedication paid off in the long run.

Although, practicing nonstop helps the team in the field, it’s the bond between the girls that has made them into the strong team they are.

One of the team’s captains senior Alejandra Lainez described the team as family.

The girls’ soccer team  is one of the most successful athletic teams at Parkdale, but they are sometimes looked over in comparison to the other teams. The truth is that women’s sports face great challenges to be viewed equally to male teams. This is happening in all levels of sport, not just at  Parkdale.

According to the Women’s Sports Foundation, male athletes get $179 million more in athletic scholarships each year than females do. Not only that, but according to United States Women’s National soccer team, they received a $250,000 bonus payment for the World cup while if the men’s team would have lost they would get around the same amount as the women’s team who won.

Coach Ms. Bethea is also familiar with the struggles with and inequality of being a woman in the sport’s world.

“I came from a background where I had a whole bunch of brothers and female sports were not viewed or respected in a way that male sports are,” she explained. “So it’s something that I learned at a young age to fight against that type of stigma [and] just to maintain your level of respect that’s preserved. I maintained that even in my youth and I do with them.”

Although inequality can be visible in the sports world, the team doesn’t let that bring them down. At the end of the day, soccer is something that they enjoy and love to do. The coaches, who also include Mr. Musa, play a big part of why the team is doing so well. They are the girl’s biggest supporters on and off the field.

“[Coach Bethea] is someone [who] you can talk to about anything in your life,” said Lainez. “Someone you can trust. She might have her moments, but we love her very much.”

With the whole team working together and having a great winning record, the team skipped the first round of playoffs and made it to Regional finals against Bladensburg where they played at Northwestern High School. A goal was scored by the Panthers in the first half.  The Mustangs tied the game in the second half, but the Panthers made another goal leading, them to a victory win.

Lainez and the team had big hopes for the remainder of the playoffs.

“I want nothing but the best for the team,”Said Lainez.  “We are all a strong family together and I hope it continues to be that way because once a panther always a panther. I love my team.”

The girls went on to state quarter finals at Charles Flowers High School but lost to Montgomery Blair High School on Friday, November 1.