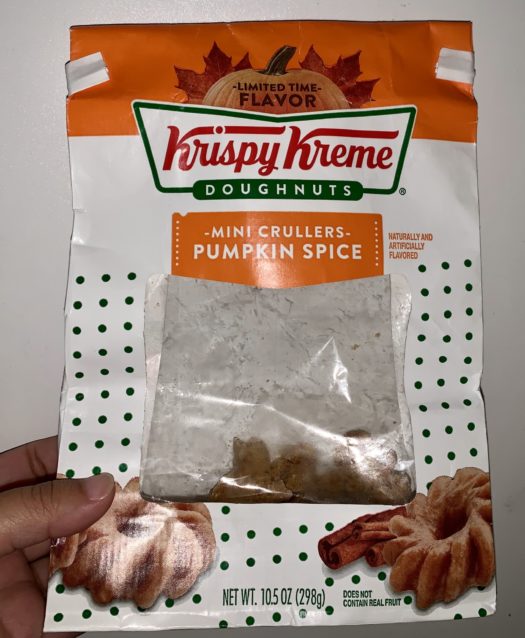 ▲
Krispy Kreme crullers so good, I had to finish the whole bag.
Zenaida Vasquez

▲
Krispy Kreme crullers so good, I had to finish the whole bag.
Zenaida Vasquez

It’s October, that means it’s time to pull out your boots, spooky clothes, and that right you guessed it: your famous pumpkin spice. Pumpkin spice is very popular around the fall time, that you can find it in almost everything. You can find it in your coffee, pastries. cereals, even for your beloved furry friends treats there’s pumpkin spice!

First up, are the drinks.

I know everyone goes here but as a pumpkin spice virgin. I might as well start with the most basic/popular place for pumpkin spice. The drink was cute, but the taste itself was more bitter than the rest that I had. It was sweet but not too much. I wouldn’t recommend this if your someone that doesn’t really like the bitter flavor. I could definitely taste from start to finish. It isn’t bad just not my favorite.

I walked in and the first thing I noticed was the big sign saying all of the different pumpkin spice drink they had for the season. Both can be served hot or cold, but since it was a little chilly. I decided to get my served hot. I got the caramel pumpkin spice latte. It smelled delicious, you can smell caramel and cinnamon. You could even taste it too. It does, however, have a bitter aftertaste to it, but you get used to it. I would certainly get this again. It was the perfect mixture of sweetness and bitterness balanced each other perfectly. It’s like they were meant for each other”.

This one reminded me of Dunkin Donuts, the smell was the same, but the options for this one was different. 7 ELEVEN gives one the option to use whether you want milk, or have marshmallows or have chocolate syrup on it and so much more. So what I made was half pumpkin spice latte with the other half with whole milk and with cinnamon. It was amazing. I have a sweet tooth and this was definitely sweet. I loved it very much, but drinking too much sweetness can be too much. So I’ll admit even when I loved it, I knew it was too much but having the freedom to put whatever is good.

Now, May I present to you the pumpkin spice food trials.

I had the Honey nut Cheerio, limited-edition pumpkin spice and first impressions, were good the box looks good and I love all of Honey Nut Cheerio flavors as well. So my hopes were very high. Once I actually saw the cereal I noticed it had an orange tint to it and that it smelled weird. That first taste though took me by surprise. I was so disappointed. It tasted like a very plain cheerio, but with a pinch of cinnamon. There was no kick to it, just dullness all the way. Don’t get me wrong, It was good, just not the best. It could have been better. Come on, Cheerio.

The Krispy Kreme doughnuts were amazing. It was a “Perfect Blend” between pumpkin spice and sticking to their famous glazed doughnut This was a combination of the two and it was like Angels landing on my taste bud and blessing me that’s how good it was. it isn’t very sweet, but it isn’t Bland either. it’s not overpowering in sweetness and it isn’t bitter. I think it’s perfect for people who like pumpkin spice but not to an extreme.  this is the perfect amount of pumpkin spice where does it feel like it’s overpowering.

This was sorta awful and way too sweet. It felt like if I had diabetes after one bite. It also looked messy as well when you first look at it. Looked sketchy as well like this may or may not have chemicals they didn’t list. It had this dull orange color, which made it look more lifeless than me. The outside was bread while the inside seems to be some more of vanilla and cinnamon filling, which was way too much for that little roll. The filling was coming out everywhere after one bite.

A moment of silence, please for the pumpkin spice rice Krispy treats I tried to make. Sadly, they burned up in flames and were too hard to eat afterwards. You will be missed.

I think it’s pretty obvious, which ones were my favorite, but just in case you didn’t know. It was Dunkin’ Donuts and  Krispy Kreme. Both of there felt like pumpkin spice, but it was too much. Just perfect.