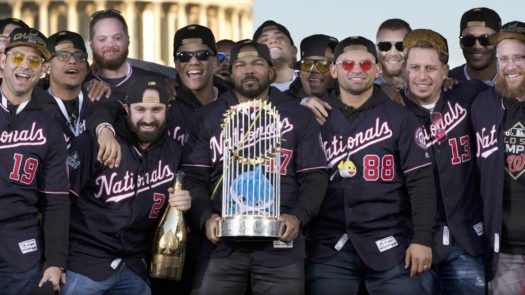 ▲
Nationals celebrate their championship at a parade in D.C.
google images

▲
Nationals celebrate their championship at a parade in D.C.
google images

On October 30th, The Washington Nationals made history by winning their first World Series championship. The team had not made it to the World Series since almost 100 years prior in 1924. The Nationals won against the Houston Astros with a score of six to two.

The games were full of excitement on the stands and in the dugout, with the team members cheering on the batter, dancing after a home run and even singing Baby Shark.

Fans at home enjoyed the celebration, as well.

“[I liked] watching all the excitement that was going on with the dancing after the home runs and the excitement after all the big plays,” said history teacher and baseball coach Mr. Poulakos.

The Nationals had a great post-season but their season was not always so successful.  According to federal baseball, on May 23rd, their records were 19-31, but they overcame their obstacles and had a 82-40 record at the end of the post-season. Federal Baseball calls it the best record in baseball at that time.

One of the star pitchers, who started this year, Max Scherzer got injured before a game and had to be substituted with Joe Ross.

As reported by USA Today, “Scherzer’s absence from Game 5 is a result of neck and back spasms, which Martinez, [manager of the team] says [had] been flaring up for the past few days and making it impossible for Scherzer to pitch.”

Even when the Nationals faced tough times, the fans were always supporting the team.

Red Caps and shirts covered the tristate area, from babies, dogs and even Metro buses with their head signs saying “GO NATs” . Bars were full when games were played, and fans greatly believed in the underdogs of the postseason.

On November 2nd, fans gathered in DC to celebrate the championship brought to the city. From Constitution Avenue NW to Pennsylvania Avenue NW at 3rd Street NW, the streets were filled with fans cheering as the team passed holding up the World Series trophy. The team celebrated drinking and popping champagne bottles.

“When you’re a fan of any sports team, you always gotta believe that your team has a chance no matter what,” said senior Jordan Lucero.

The team started with their infamous mottos  “One pursuit” then by the end of the season, it became “Stay in the Fight”. The team ended with the motto “Fight Finished” as they took home the ultimate prize.