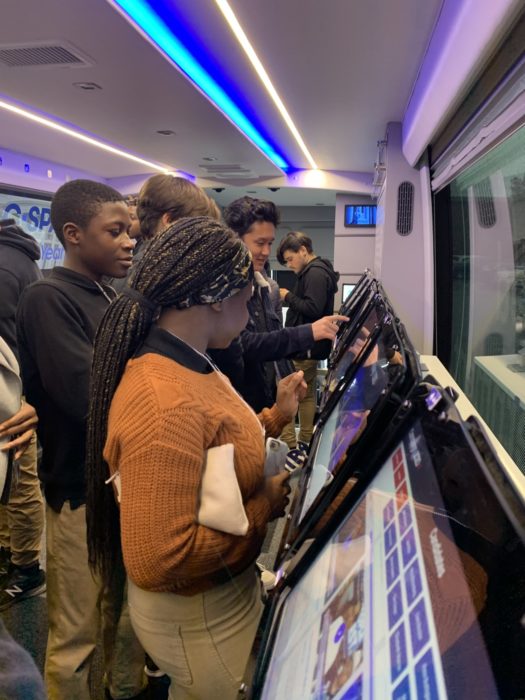 Many of us didn’t hear that a CSPAN bus visited Parkdale is or let alone even know what it is. Well, CSPAN is a non-government funded network which means that all the political events that they cover are just that. No commentaries, analysis, or editing. Just what’s going on with whatever their covering. In a time like this, this is very important to have a balanced network.

“So, for students, it’s pretty awesome because there’s a lot of primary sources. Students usually have a paper to work on, [and] projects. So, it’s a really great source for them,” said CSPAN Marketing representative, Shannon Augustus.

They have tablets that hold information about presidential candidates and their recent appearance, the candidates’ campaign trails, even their tweets too. Not just from our time, but from the 1900s. They have just about everything on their bus. They also have a 360 camera, which you can see any recent march that has happened as the woman march. They have a selfie station and a studio to do live interviews as well.

“Government runs our country, So, students need to know that as they grow older there will be different decisions to make,” said April ranger, CSPAN host.

Raising awareness is what we, young people should do. We need to get informed on what’s going on and who we choose for our next governor, Vice President, and so much more.

Only till recently the media has been trying to push forward the idea of one going to vote. That we, the people have the power to change our future for the better. However, we can’t choose whoever, one has to do their research. You wouldn’t go and drive and car without even learning what pedal is the break or the gas, would you?

According to census.gov among the age of 18 and 19 year old  only 20 percent voted in 2014 but it went up to 36 percent in 2018. Even though we still have a long way to go in teaching others that benefits of voting, we can learn more by watching channels like CSPAN, that just give you the facts without any bias.

Being more “woke”in politics isn’t boring or isn’t our problem because actually it is. We decide what our future can be at the end of the day, whether it’s as small as voting and being woke the choices we make will determine the future of tomorrow.