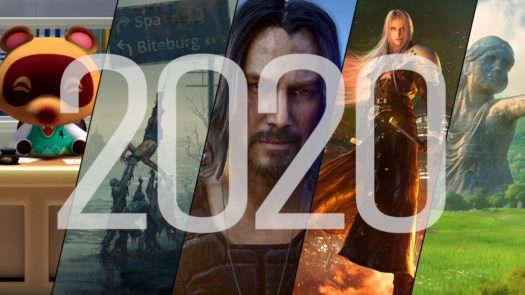 2020 is the year where stuff is going down, you thought 2019 was bad JUST WAIT TIL WE’RE THREE MONTHS IN 2020. EVERYTHING IS GOING DOWNHILL FROM THERE. So why not buy yourself a game to keep you distracted by the chaos around you. Here are 2020 games I recommend you to play

Destroy All Humans is an old classic game that came out in 2005 and are finally remaking after coming out with four games. This threatening sounding game is played from a third person view and you control Cryptosporidium 137, an alien that arrives at earth in 1959 to get human DNA. The gameplay has already been released and the game’s graphics are more cartoony compared to their first couple of games, all you do is collect DNA and the rest of the game you can just play around with crude humor. You can destroy houses with your space ship, use telekinesis gun to pick up whatever and yeet them across the map. If you’re up for a non-serious game with the objective of killing humans, this is the one.

Almost like  “Destroy All Aliens!” instead of going ham on humans, you go ham on demons. If you played Doom before then you would know what intense bloody gore is about to go down. Doom is personally one of my favorite games. For those of you who don’t know about this palm- sweating, heart racing, “I have to get out of here,” game, let me educate you real quick. Doom (2016) is a first person shooter action game in which you play as Doomslayer (who looks like an edgy spaceman) fighting demons in hell and on Mars. If you’re like me and love to see blood and guts all over the place, then Doom is for you. Imagine being a really angry powerful man who doesn’t care and anything that stands in your way you start beating the living daylights out of it or in this case living hell out of it; well that’s this game.

In Doom Eternal, a lot has improved from 2016. The weapons looks more fun and useful. For example, the super shotgun has a grappling hook that lets you latch onto the enemy to get closer to them. Think of it like Mortal Kombat Scorpion going “ GET OVER HERE” but on a shotgun. Not only have the weapons improved, there are new demons. In 2016, the demons were your average hideous looking creatures that have their own unique attacks to them. Now in the Eternal, there are new demons who look like they put up a serious and annoying fight. One of them is supposed to be useless and not do a lot of damage, but this little spiky dude wants to teleport and give you a “surprise, it’s me” punch, which can be really annoying if you’re fighting a bunch of other enemies at the same time.

If you’re a fan of drama and zombies with a sprinkle of action, then this is probably the one. Last of us is like every drama based zombie apocalypse game/ show; you mainly fight humans and a little bit of zombies. In the first game, you play as the character name Joel who is accompanied by a teenager named Ellie who are trying to get through the apocalypse. In Last of Us 2, you’re now playing as Ellie five years later after the events from the first game. After something horrible happened, she went to seek justice against a cult called Seaphites. They already released a demo for it, the gameplay looks easy to control and you see some pretty fudged up stuff…but hey it wouldn’t be an intense zombie game without that. The graphics have certainly improved compared to the first game, the environment makes the atmosphere suspenseful and it feels like you’re on edge half the whole game.

There are more games coming out in 2019 heading into 2020, these are just a few I listed but if they’re not your style. Just watch some game trailers for games that are coming out and find what suits you. I know I’m missing some important games, but they are too dang hard to even explained (AKA Cyberpunk 2077)