Tech Blast from the Past 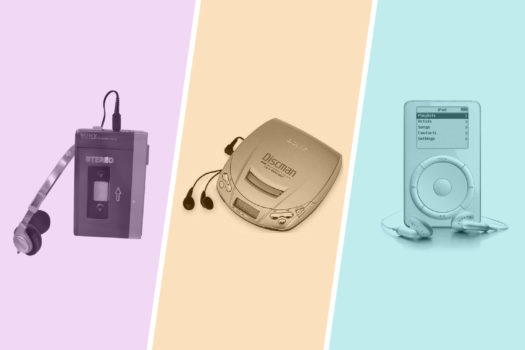 ▲
Here are generations of tech
Google

▲
Here are generations of tech
Google

The decade is coming to an end and if you really think about it, we’ve come a long way!

Now you can receive and respond to messages  and calls from your watch,but wait, there’s more! Now a days you can you can “summon” your car to your location from your phone. How about that!

If you think all this is crazy talk, maybe it’s because you’re stuck in the early 2000s listening to a classic like “I Gotta Feelin” by Black Eye Peas or “Maria Maria” by Santana from your MP3 player. The MP3 player was originally released in 1997 from South Korean by company called SeeHan Information Systems. Eventually, other companies like Apple decided to make their own version of an MP3 player which lead to huge success to the first iPod to debut in 2001. This began production for the lineup of IPod’s in each generation including the iPod  nano. The iPod Nanos small size made it popular for its portability and practicality. The Nanos square sleek design was enough to to.encourage other companies to make custom-fitted watch bands for the nano to resemble a watch. This was an outlook on the “smartwatch” era would look like.

The typical phone functionality along with being able to stream music from your watch was the goal which is why the iPod nano was the inspiration of smartwatches that was ahead of its time. The evolution of pocket watch to wristwatch  to a smartwatch has changed the drip game. If you were to take the newest Apple Watch back to the year 2000, everyone’s mind would be blown. People would have to call their friends on their sidekicks or their Motorola’s RAZR phones about the news.

For those who have no idea of what I’m talking about, the Sidekick phone was the baby computer everyone wanted or hand. The design had the keyboard under the display which made it look compact. In order to access the keyboard you’d have to slide the display to the side and your baby computer appears. Now if you love to hang up on people, then you probably had the RAZR phone which has a rectangular and clam-like design where  you would have to open and close the device to check an incoming call or end the call. It was one of the most durable phones there were at the time. Nowadays you crack a phone easily. These phones were the greatest of its time, so Motorola had to make its return in 2020. Although it’s not what you’d expect it to be, the Refreshed RAZR has a flexible display that folds open and closed.

However, phones and watches aren’t the only pieces of technology that have gotten an upgrade. Cars have also gotten the fresh new gear with up to date tech so you wouldn’t focus on your phone for directions  to the party your running late to or the song on the playlist you’ve been looking for.

Remember using the aux cord from the cars radio to play some “Uptown Funk” by Mark Ronson ft. Bruno Mars, good times huh ? Well that song was released five years ago, crazy right! Within those five years technology has changed the car industry try time and time again. Now you have remote start which is turning on your car from your car remote. Not only that, now there’s Bluetooth for you touchscreen display of a radio. As soon as you turn on and enter you car, if you have Bluetooth on your phone it will automatically connect using either “Apple CarPlay” or  “Android Auto”. If you are an iPhone user, Apple CarPlay has the expected Apple interface of an IPhone or IPad that provides applications like Music, Maps and many others. For more of a hands off experience Apple CarPlay also includes Siri. If you’re an Android user, you can expect a clean and recognizable interface that provides similar applications that Apple CarPlay has

So, at this point you’re probably think whoa, literally an entire decade just flew by. With this decade coming to an end, and how far technology has come, we have yet to see what the technology holds for the future. We’re in a world where almost everything is run by wifi. We just have to wait to see what comes next in the new decade.