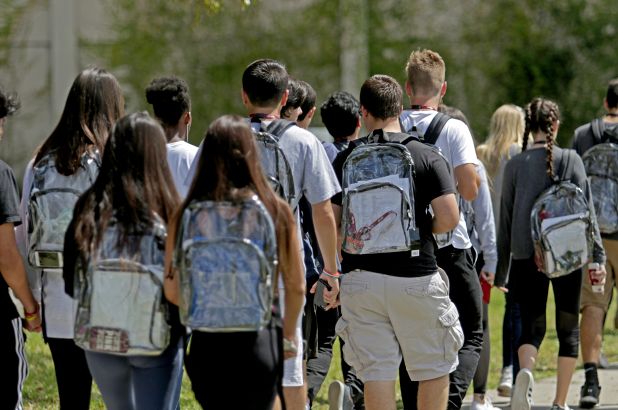 ▲
Districts around the country have turned to clear backpacks.
Google Images

▲
Districts around the country have turned to clear backpacks.
Google Images

At Parkdale, students are not allowed to carry their book bags around school, a policy that has proven to be unfair to the students who have many textbooks and journals for all their classes.

One of the main reasons why students should be able to use their book bags during school is because of hallway traffic. Parkdale’s hallways are always full during transition, one of the busiest being the intersection between the 260s hallway and the Annex breezeway. Many of those hallways are where many students’ lockers are, which makes it difficult for them to get to their lockers and arrive to class on time in the five minutes given.

“Having my bag helps me be early to class,” said Northwestern High School freshman Mia Morales. “It also helps me from keeping my stuff organized, safe and never losing them.” At Northwestern, approximately 5 miles from Parkdale, students are allowed to carry their book bags.

Because students’ lockers are sometimes on the other side of the school, they don’t always have time to go all the way to their locker and get to class on time.

“I was late practically everyday,” said sophomore Christina Doobay. “It was too much of a struggle to get to class on time.”

Schools have taken on the policy of having students leave their book bags at their lockers at the start of the day for the safety of the students, which could be a testament to recent events. According to CNN News, there were 45 school shootings in 2019 alone.

It is understandable that these measures are taken for the safety of all students. However, banning book bags does not have an absolute solution. Students could still hide weapons or drugs in their lockers. If there are multiple incidents at a school, larger measures should be taken.

Telling students to leave their book bags in their lockers will not stop someone from bringing weapons or drugs to school.

According to Detroit CBS, six students from Harper Woods School District were arrested after police officials found alcohol, a stash of drugs, guns, and knives were found in their lockers. At Parkdale, locker checks aren’t done unless a specific student is being checked. There could be many harmful items and substances that aren’t allowed at school, but having no bookbags doesn’t guarantee safety.

Other districts around the country have gone a different route than completely banning book bags. In the 2018-2019 school year, a district in Texas began mandating clear book bags. This policy allows students to have their book bags in classrooms without students and teachers feeling unsafe about what could be in a student’s book bag because items inside could be easily seen.

The question is, though, if this policy were to be adapted at Parkdale, would students go out to buy clear backpacks? This would benefit students who have different notebooks for every class. However, not every student would like to have a clear book bag where anyone can see items that they don’t want other people to see.

“If our school or PG county thought it were necessary, I would support [the clear book bag policy],” said English 10 teacher Mrs. Weinberg. “I can’t really imagine that would be something students would like because you know, people have private stuff in their bags that they really don’t want everybody to see.”

Nevertheless, students would be left with the decision to either have all of their necessary school supplies with them at all times or lug around textbooks in their arms.

As of now, the Parkdale book bag policy seems to be unchanging.