Students exposed to different testing experiences due to format of test 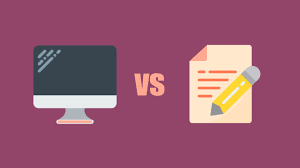 As the years fly by, most students and teachers have seen the change from paper and pencil tests to computer based tests through elementary, middle and high schools. Although paper tests remain in use, many major tests are all taken on computers. This has created the question: Which type of test is better: handwritten or computer-based?

According to a study done by researcher Ben Backes of the American Institutes for Research, between a student taking a test online and one on paper, “the student taking the test on paper would score higher.” More specifically, his research team found that certain districts in Massachusetts were taking tests on paper and were scoring exceptionally well year after year until tests were switched to computer tests. Their scores dropped due to the change, and they showed similar scores to the lower-performing districts.

This shows that not only will students have to go through the struggle of adapting to a way of testing, but they are performing worse instead of better.

On the other side, according to the Northwest Evaluation Association (NWEA), the company that runs MAP-R testing, “the technology […] has enabled the school and its partners to develop and analyze test score data rapidly. The district now conducts mid-year tests and even ‘on-demand’ tests that help give administrators and teachers feedback about student progress.”

When the teachers are given feedback, it allows them to know where to help an individual student, or the whole class. By testing on computers and receiving immediate results, teachers have more accurate ways of teaching, while the students will know what to work on more.

Furthermore, sophomore Alexis Tapia says that having online tests gives students advantages. These online tests have tools that help students, some even getting the option to have the audio version of their test.

However, the problem with how tests are taken is not necessarily that one is different but the fact that students are not as used to taking tests on the computer. Backes concluded that students were not used to tests on computers in his research. While students know they can go back and change an answer on paper, many may struggle with being able to go back to a particular question on the computer.

Other reasons why tests are preferred more on paper rather than on computer could even have to do with vision.

“[Technology] may affect students’ visions with new technology advancements,” said sophomore Realyn Del Campo. “More assignments, including tests have become virtual, while people say that teenagers our age are always on our phones. Part of that reason is because of the homework given to us.”

In fact, according to American Optometric Association, there are also certain diseases such as Computer Vision Syndrome that are caused by focusing on a screen over a long period of time, in this case would be the test.

While some teachers have transitioned into testing on Google Classroom forms and the likes, major tests like the PSAT and SAT are still being completed on paper.