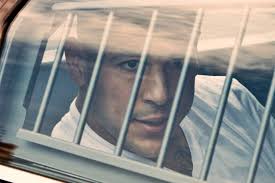 ▲
The new Netflix documentaries takes fans and viewers inside the mind of the former Patriot star.
Google Images

▲
The new Netflix documentaries takes fans and viewers inside the mind of the former Patriot star.
Google Images

The 2020 docuseries Killer Inside: The Mind of Aaron Hernandez, has viewers feeling all types of ways. Feelings of confusion from believing whether he’s guilty or not to feeling attraction towards a suspected murder. This is a Ted Bundy situation all over again. Just like Bundy, people could not believe that an attractive and charming guy like Hernandez could be capable of such horrific acts.

However, the docuseries deeply depicts just how Hernandez was, in fact, capable.

Hernandez was a very well-known American football player for the New England Patriots. His fantasy of a career came to an end in 2013 when he was convicted for the homicide of his fiance’s sister’s boyfriend, Odin Lloyd. In 2015, he was found guilty and was sentenced to life in prison. Two years later he was acquitted of the murders of Daniel de Abreu and Safiro Furtado which took place in 2012.

In January 2017, director Geno McDermott met with journalists Dan Wetzel and Kevin Armstrong, who had both covered Hernandez’s trial for Lloyd’s murder and were writing a book about Hernandez. McDermott wanted to get more insight into Hernandez’s life growing up to see how that led to his “killer” mindset. So, they gathered many interviews and additional research to create a documentary.

The sequence in which the docuseries was presented was in a way that was accessible to people who were unfamiliar with Hernandez.

Imagery of a timeline is shown at different times throughout the series to help viewers understand how each moment in his life led up to his violent actions. In addition to that, many audio recordings of his prison cell calls with family members and friends were presented. Through those calls, we were able to see how Hernandez had many close relationships that shaped him into the person he was.

In addition to those calls, many videos of Hernandez at football practices are shown along with other videos of him interacting with news reporters, fans, or even just family and friends. The videos show that Hernandez was a very kind and respectful person who genuinely cared about the people around him. It was clear that he had a very successful life and had a lot going for him.

“How can an individual who has everything in the world going for him, who has incredible athletic ability and career, get involved in something like this?” said Hernandez’s attorney, Patrick Haggan.

So, as everyone wants to know, why exactly would he commit such a terrible crime?

Some believe the reason for Hernadez’s actions might have been Chronic Traumatic Encephalopathy (CTE), the brain disease that was discovered after his death. A study published in 2018 by researchers at the VA-BU-CLF Brain Bank found that 190 of 202 football players who played in college or the NFL have been diagnosed with CTE.

Former Pittsburgh Steelers center Mike Webster, was the first NFL star to be diagnosed with the condition. Researchers believe the condition may be linked to both dementia and suicidal tendencies in some players. Unfortunately, former NFL player, Junior Seau, ended his own life just so that his brain could be studied. He knew for a fact that something wasn’t right.

As a result, the uprising of this infamous brain disease has driven many players to retire due to the risks of brain damage. Chris Borland, who used to play for the San Francisco 49ers, decided to retire in March 2015 after he could no longer ignore his concerns regarding head trauma. In the docuseries, Borland passionately exposed the NFL culture and claimed that they don’t care about the players at all.

“The reason football’s the most popular sport is because it’s violent,” said Borland. “They’re not in the health business, they’re in the violent business.”

The brain condition is said to lead to violent behavior in some people. Consequently, Hernandez was bluntly described as a violent person at times. He’d go from being a friendly and loving guy to an angry and violent guy in just a moment. In one of the calls presented, we see that Hernandez had a very short temper and would get so mad to the point that he would start to shake.

Another reason for his violent behavior was most likely due to his childhood and how he was raised. People who knew the Hernandez family say that Hernandez’s father, Dennis Hernandez, was violent, and that domestic violence was embedded into their family life. His dad struggled with alcohol and when he’d get very drunk, he became very violent with Hernandez’s mother.

“Violent outbursts like that were not uncommon in the Hernandez home” said Tim Sansoucie, a close friend to the Hernandez family.

Who knows what’s to blame for Hernandez’s horrendous actions. One thing we know for sure is that although childhood and brain trauma does not justify anyone’s actions, no one is born a killer. Before watching this docuseries, I believed there was no way this man could have committed something like that. However, this three-hour series really threw me for a loop because now I have no idea what to believe.

With an audience score of 82 percent on Rotten Tomatoes, the docuseries crafts a compelling overview of a series of tragic events.