Should there be a change in required standardized testing? Short answer: yes. 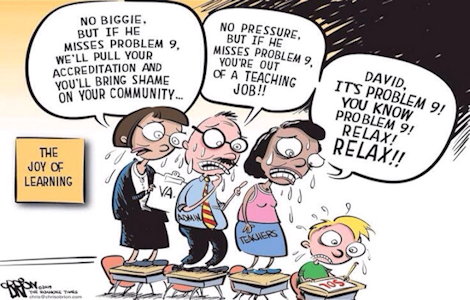 ▲
The above cartoon shows the trickle-down pressure of student performance on standardized testing.
Google Images

▲
The above cartoon shows the trickle-down pressure of student performance on standardized testing.
Google Images

Standardized tests have been a part of American education since the mid-1800s. Their use skyrocketed after 2002’s No Child Left Behind Act, which mandated annual testing in all 50 states. Students in the U.S slipped from being ranked 18th in the world in math in 2000 to 40th in 2015, from 14th to 25th in science and from 15th to 24th in reading.

Throughout the past decade, many students have begun to feel as though they are being forced to do more and more mandatory assessments. Students are tasked with SLO’s, PARCC exams, the MISA, HSA, and more. The assessments listed don’t even count the exams that students are constantly given form their teachers throughout their years in highs chool.

Standardized tests are highly expensive, using taxpayer dollars that could be put towards better use. A study found that standardized tests cost some states over $1.7 billion a year–money that is put into tests that students don’t really see the value in.

“I understand that it measures our progress but at the same time it’s always so dull,” said junior David Cedillos. “You see the students dread this and  it gives them a lot of stress”

Standardized tests have not only been proven to cause stress on students but have also had the negative effect of putting pressure on teachers as well. Teachers also have the added pressure of teaching about the exams due to the fact that teachers’ success is partially measured by their students’ scores on standardized tests. However, these scores are dependent on all of the students’ and teachers combined – not just on a singular teacher’s performance.

Standardized testing does however come with some positive benefits that ride alongside the negative effects. Standardized testing focuses on essential content and skills and eliminates time-wasting activities. The multiple-choice format used on standardized tests also produces accurate information necessary to assess and improve schools.

However, the skills that students gain from practicing for the standardized exams is almost always outweighed by the fact that students are losing out on valuable instructional time and harming the mental health of students.

I believe that a compromise can be made between the student, distributors, and producers of the standardized test. I believe that a yearly anonymous survey should be distributed to both students and teachers allowing the students and teachers to voice their opinions on standardized testing and allowing the manufacturers to take the surveys and improve the exam experience for everyone.