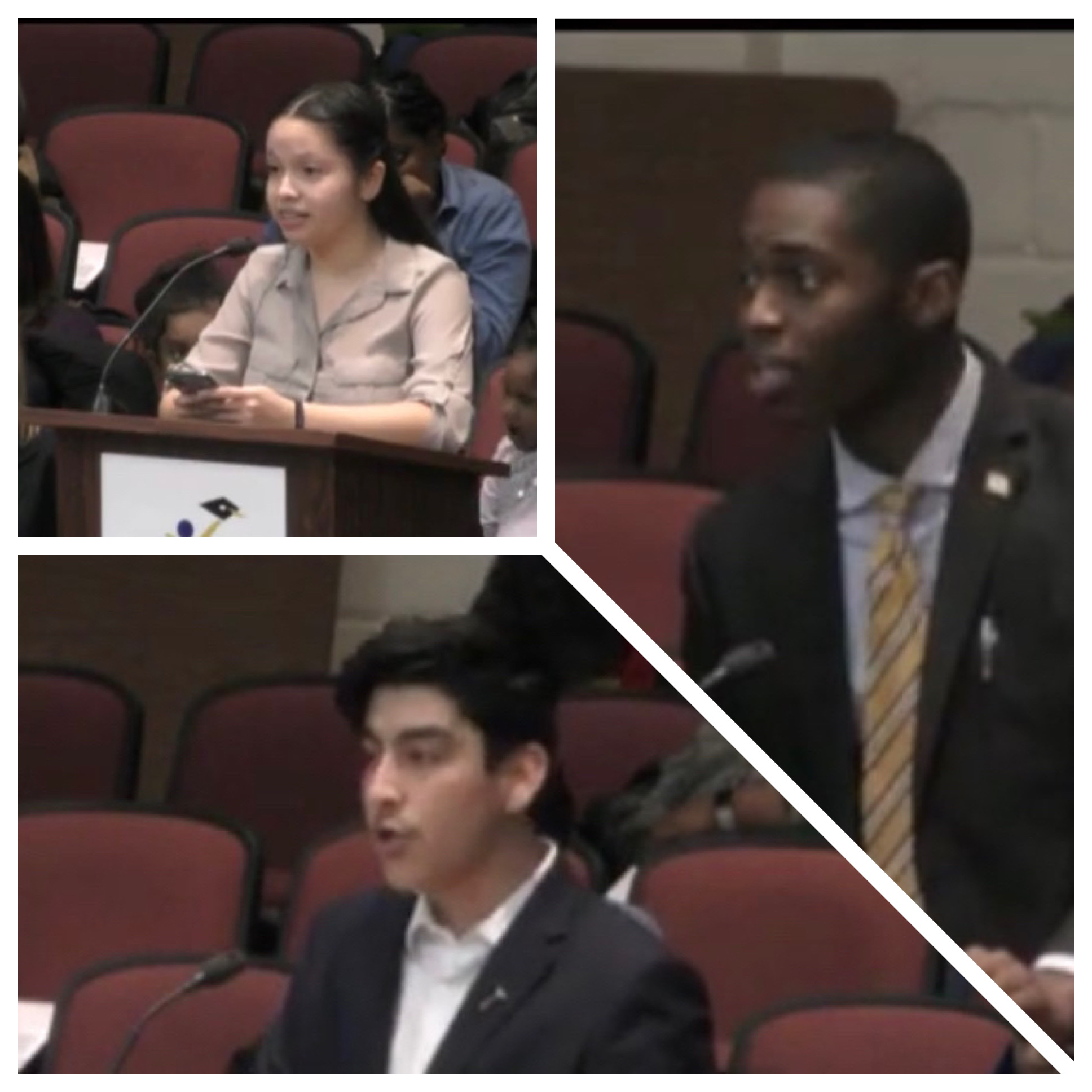 On March 5, 13 PGCPS students, myself being one of them, went to the Prince George’s County Board of Education to advocate for a very specific issue: making financial literacy a graduation requirement. The effort to make financial literacy a graduation requirement has been ongoing for years but in the past few months, the possibility was seeming closer than ever.

The fight got its first rejuvenation with the election of senior Joshua Omolola to the office of Student Member of the Board of Education (SMOB) in May 2019. One of his campaign promises was to make financial literacy a graduation requirement for all students.

Omolola has found that keeping that promise hasn’t been as easy as making it.

“The issue today isn’t about legislation, it’s about precedent,” he said at a February board meeting regarding the gridlock he was facing to get the bill passed. “When someone unilaterally moves forward with their agenda without being respectful of what a committee has done, we’re setting a dangerous precedent.”

Omolola wasn’t facing the challenge alone, as he was able to get the vice chair of the board, Edward Burroughs, to support the initiative and co-sponsor the bill in its early stages.

“Every step of the way, I follow the process that was outlined,” said Burroughs in that same February meeting. “The process kept changing, opinions kept changing and it’s very disappointing that something so critical to our young people is being delayed in this manner.”

“The idea that we would start these courses in the fall with a graduation requirement soon there after in the subsequent school year, I would just like more time to review that and kick the tires on it,” said board member Paul Monterio. “The figure I saw quoted in the board action summary was not a small number.”

The Board of Education has numerous obligations, one being deciding the budget for all of Prince George’s County. Mr. Monterio reflects the indecisiveness of many members of the board regarding financial literacy. They’re worried about the cost and not speeding it through the normal process of passing initiatives.

With many on the board still unsure on voting for financial literacy, Omolola invited members of the Parkdale community to speak at the Jan. 9 board meeting to advocate for the bill. Financial Literacy teacher Mrs. Bistransin, PTSA president Pastor Mike, and myself were some who were invited by Omolola.

“On the first day of my class, I always tell my students that this is an elective class but you’ve been in school 11,12 years,” said Mrs. Bistransin who has been teaching financial literacy for over 20 years. “When you get out of school, you learned a lot but you may never quote Shakespeare again or use the pythagorean theorem, but you are going to use every concept I teach you in this course everyday for the rest of your life.”

Having a student, teacher and parent come and advocate for the issue was targeted to show those indecisive members on the board that this is a bill that the entire PGCPS community wanted. The three of us returned for the Feb. 20 meeting to not only speak once more but also to see the bill go through its first round of voting. Despite going through the appropriate committees, financial literacy was not on the board’s agenda for that meeting, causing a fairly mild debate among the board on whether the bill should be reviewed by its academic committee.

“I sent the notice to the policy committee in January and so if it clearly and explicitly was supposed to be sent to the academic committee, why wasn’t I told in January that it was clearly and explicitly supposed to go to the academic committee?” board member Burroughs asked when confronting his fellow members on the process of getting financial literacy on the agenda.

After debate on where the bill’s next destination should have been, the board held two more votes regarding the bill. The first vote was to add it to that meeting’s agenda where it passed and added. Due to the size of the bill, its cost and impact it’ll have on schools and students, it had to pass to rounds of votes,or readers, in order to be passed. On Feb. 20, the bill passed on the most narrow of votes of the board.

Seeing this as a last chance to get the bill passed, Omolola reached to a variety of students from other PGCPS schools. The public section of the board’s meeting only allocates time for 15 members of the public. Out of those 15, 13 of the spots were PG county students who all signed up to advocate for financial literacy as a graduation requirement. Out of that 13, three were Parkale students.

“I don’t know how to write a check, I don’t know how write a W-2 and all those other things,” said freshman class president Katherin Aguilar about her lack of basic financial knowledge.

While most presenters were very respective and informative to the board, Parkdale senior Bryce Awono and freshman Alvaro Ceron didn’t shy away from being straightforward with the very same board.

“I’m sure that you all are aware of the optional financial literacy course there is at schools, but that keyword is ‘optional,’” said freshman class secretary Alvaro Ceron. “That is what will lead my generation to loss and failure.”

Awono expressed the same frustration and concern in his words to the Board in a way that may have hit close to home for many of them.

In addition to Parkdale students, other PGCPS students weren’t afraid to offer a new perspective on the issue that has not been addressed.

One student in particular spoke on behalf of a large percentage of students in the county: ESOL students.

“Most ESOL students are newcomers or have parents who weren’t born here,” said High Point High School senior president Vanessa Romero. “If they struggle with the language as it is, I’m sure they’re gonna struggle filling out tax forms, W-2 forms, [and] bank forms.”

Others, like Friendly High School senior Hannah Wright addressed the lack of real-life skills that the current curriculum offers and how financial literacy could solve that.

“School doesn’t teach us things like filing taxes, balancing a check or saving for retirement,” she said. “While I may know y=mx+b, [and] pythagorean theorems [does] help for preparation for a higher level algebra, I honestly don’t know anything about money.”

These students didn’t just come out in support of Omolola’s bill but to show how financial literacy has truly impacted their lives.

“It’s important we show them that this is really what the students want,” said Ceron. “It isn’t just what I want or what Joshua Omolola wants. It’s what the county wants and needs.”

Despite nearly all members of the Board congratulating and commending students for coming out and speaking, members voted to push the financial literacy bill back to their April 15th meeting. It was clarified by Burroughs that all on the board are aware that PGCPS could support and implement financial literacy as a graduation requirement but that didn’t mean the issue was a done deal.

“Something that I saw on the graduation requirements made by the Maryland State Department of Education is that there’s always a budget implication, there’s always a policy implication,[and] there’s always an academic application,” said Omolola as he was echoing the feelings of the rest of the students. “Numbers change, things happen and we have to adjust, but to say that we’re gonna prolong this legislation a whole month, to the irony of Tax Day, to get this done sounds redundant [and] sounds very political of this board.”

“So please for my children, my students, do not let tonight be a sign that we are not supportive.”, said Dr. Goldson. “What it means is that on April 15th, a tax day, we will be able to celebrate that financial literacy will now come to fruition for the class of 2023 and beyond.”

With the recent lockdown of Maryland, due to the COVID-19 outbreak, it is shown that time is something that many of us will run out of when the bill collectors come knocking. It is unclear whether financial literacy will be thoroughly discussed, let alone voted for, due to the county’s new biggest focus on the April15th meeting.

-Update as of April 15th, 2020: The bill to make financial literacy a graduation requirement passed unanimously among the board and will go into effect for the Class of 2024.