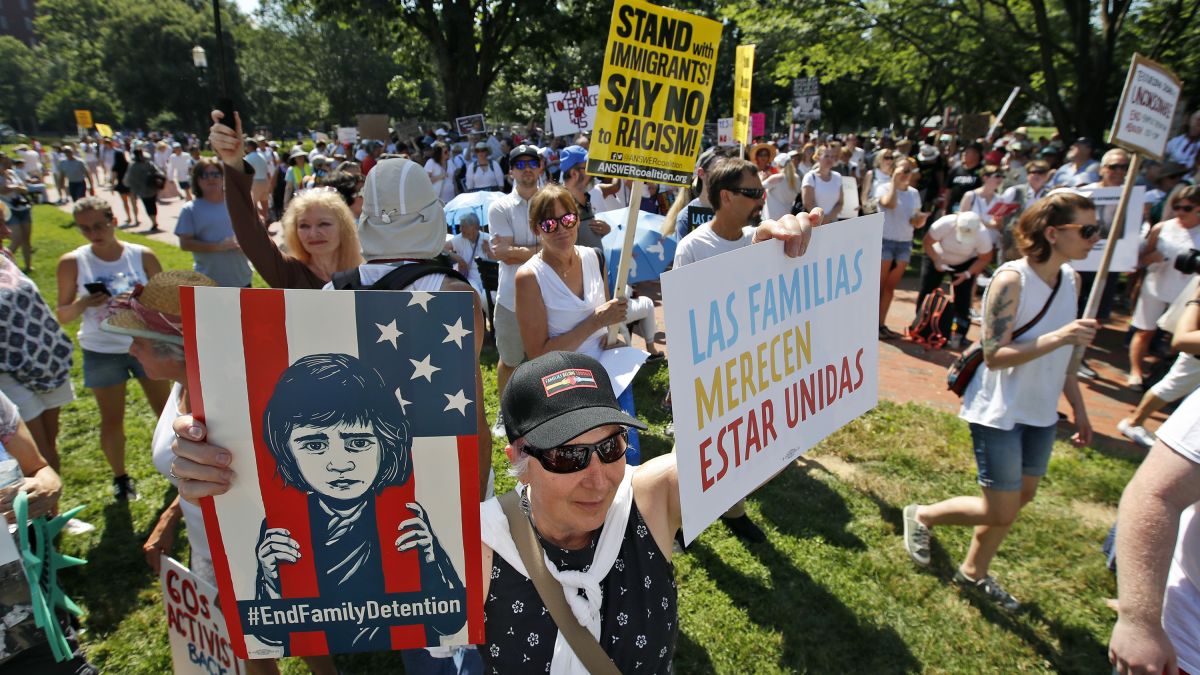 ▲
The Trump administration was unable to revoke the DREAM Act over the summer.
Google Images

▲
The Trump administration was unable to revoke the DREAM Act over the summer.
Google Images

Immigration in the United States has been a big issue for a long time. It’s a topic that is debated time and time again about how the government should deal with it and whether or not they are dealing with it correctly. Within immigration there is so much more that is involved than just people moving to a country.

Immigration first began during the colonial era, from the 19th century and from 1880s to 1920s. Most of these immigrants came to seek greater economic opportunities and others in search for religious freedom.

Today, the majority of our immigrants come from Asia and Latin America. Even till this day, many of these people that come to the United States are seeking for a better life, better economic opportunities, a place where they can be free, where they can fulfill their dreams, and to give a better life for their families.

What is immigration in the United States?

A quick definition of immigration, based off of US Immigration, is the act of leaving one’s country and moving to another country of which they are not natives, nor citizens, to settle or reside there.

The immigration laws in the United States have been built based upon these principles: the reunification of families, admitting immigrants with skills that are valuable to the U.S. economy, protecting refugees, and promoting diversity.

For many years the leaders of the U.S. have debated about the policies and the ways to deal with immigrants and the subject of immigration. Today, the current body of law governing current immigration policy is called The Immigration and Nationality Act (INA).

In the United States immigration is a huge general category that involves many different people from different backgrounds and ethnicities. Till this day, there still isn’t a proper way to deal with immigration and the movement of people. In the U.S. there’s many debates and opinions of how the nation should deal with the topic of immigration, but there hasn’t been a concrete agreement.

Deportation and its effects

One big issue within immigration in the United States is the topic of deportation. Deportation is the removal of a foreign national from the U.S. for violating an immigration law. There are many views and opinions based on this and the majority of people that are being affected by this are children.

According to American Immigration Council, more than 16.7 million people share a home with at least one family member, often a parent, who is unauthorized and almost six million of these people are children under the age of 18.

In result, immigration enforcement actions have significant physical, emotional, developmental, and economic repercussions for millions of children across the United States. Deportation of family members, whether parent or any other relative, have serious consequences that affect children, including U.S. Citizen children, entire communities, and the entire country as a whole.

One serious problem of deportation is the tearing apart of families all over the United States. Across America many different families from different backgrounds have been greatly affected by this.

Howard Dean Bailey served in the United States Navy during the first Gulf War. He ran his own business and was a husband and a proud father. However at age of 41, he was deported to Jamaica. In his article on Politico Magazine he explains his experience and how it affected him and his family.

“Then at 6 a.m. on June 10, 2010, I answered loud knocks on our front door in my pajamas,” said Bailey in his article. “Eleven armed immigration officers supported by state troopers were there with their weapons drawn, some wearing bulletproof vests. They stormed into my living room and put me in handcuffs while my wife came down the stairs, screaming, and my daughter, who was 12 years old, watched in horror. A few minutes later I was in their custody, just partially dressed, heading to the Hampton Regional Jail.”

Bailey continues to explain his testimony in the article and the process he and his family went through with his deportation.

Deportation doesn’t only affect just random people all over the country, but also impacts well known successful people that everyone loves.

Actress Diane Guerrero, who is well known for her roles in “Orange is The New Black” and “Jane The Virgin,”  was 14 years old when she was separated from her parents.

In an article from The Washington Post, Guerrero explains her experiences and thoughts of the ongoing situation of immigation and deportation in the United States.

“I know what it feels like, and it breaks my heart,” said Guerrero in her interview. “I remember my cries, and it’s nothing like what a 2-year-old must feel. It’s terrifying. I relied on friends and the kindness of strangers. I can only imagine how much harder it would be for children to have to rely on [Immigration and Customs Enforcement] agents and prison guards for comfort.”

Deportation greatly impacts a variety of families from different cultural backgrounds and ethnicities. Today, it is still an ongoing issue in the U.S. Many families being separated, kids being left without parents, and the ongoing effects of being away from the people you love. It’s something that has been going on for years and continues to do so.

How are people being treated while being in the custody of ICE?

These detention centers placed in different areas all over the United States are used to hold individuals suspected of visa violations, illegal entry or unauthorized arrival. They are also a holding place for those subjected to deportation and removal until a decision is made by immigration authorities to grant a visa and release them into the community, or to send them to their country of departure.

Over the past years many accounts have brought to light the horrible conditions and treatments that take place in these facilities. These centers are packed with numerous people, both children and adults.

In these detention centers there are no regulations or enforceable standards regarding their conditions, including medical treatment, mental health care, religious services, transfers, and access to telephones. According to UCLU, a vast majority of detainees never receive legal representation, which makes it more difficult in adversarial immigration proceedings and to place complaints about these substandard treatments.

In an article on TIMES, it states that both adults and children “have been held for days, weeks, or even months in cramped cells, sometimes with no access to soap, toothpaste, or places to wash their hands or shower.” In the article it explains that children are sleeping on concrete floors, babies are drinking milk from unwashed bottles, and that 900 people are crammed in a place that is accommodated for only 125 at most.

In a 2019 PBS NewsHour interview, Warren Binford was one of the lawyers that visited a Texas facility and spoke with children that were being held inside. In the interview she explains the different things she witnessed and the treatment going on within those walls.

“Basically, what we saw are dirty children who are malnourished, who are being severely neglected,” said Binford in the interview. “They are being kept in inhumane conditions. They are essentially being warehoused, as many as 300 children in a cell, with almost no adult supervision.We have children caring for other young children.”

These terrible conditions have been going on for years. Now with the problem of Covid-19 many accounts show that there are no masks or any resources or precautions taking place in these facilities for the health of the people and to stop the spread of the virus in these detention centers. However, there have been some accounts of ICE detentions centers using a COVID-19 disinfectant on the facility that are dangerous.

In an article for the INSIDER, it states that a report drafted by Inland Coalition for Immigrant Justice and Freedom for Immigrants, states that “employees at the Adelanto Detention Center in California are spraying HDQ Neutral — which manufacturer Spartan Chemical warns can be harmful as it can cause skin burns and serious eye damage when inhaled — in poorly ventilated areas filled with detainees.”

In the article they share accounts from inmates within this facility.

“The guards have started spraying this chemical everywhere, all over everything, all the time,” said one inmate. “It causes a terrible reaction on our skin. When I blow my nose, blood comes out. They are treating us like animals. One person fainted and was taken out, I don’t know what happened to them. There is no fresh air.”

“I started bleeding from my nose after being in contact with a strong chemical they are using,” said another inmate in the article. “I am still bleeding, more than five hours later.”

If you or someone you know is in need of assistance with their immigration status and/or threats of deportation from ICE, visit these websites for more information: