Racism proves to be nowhere near solved in modern-day U.S. society 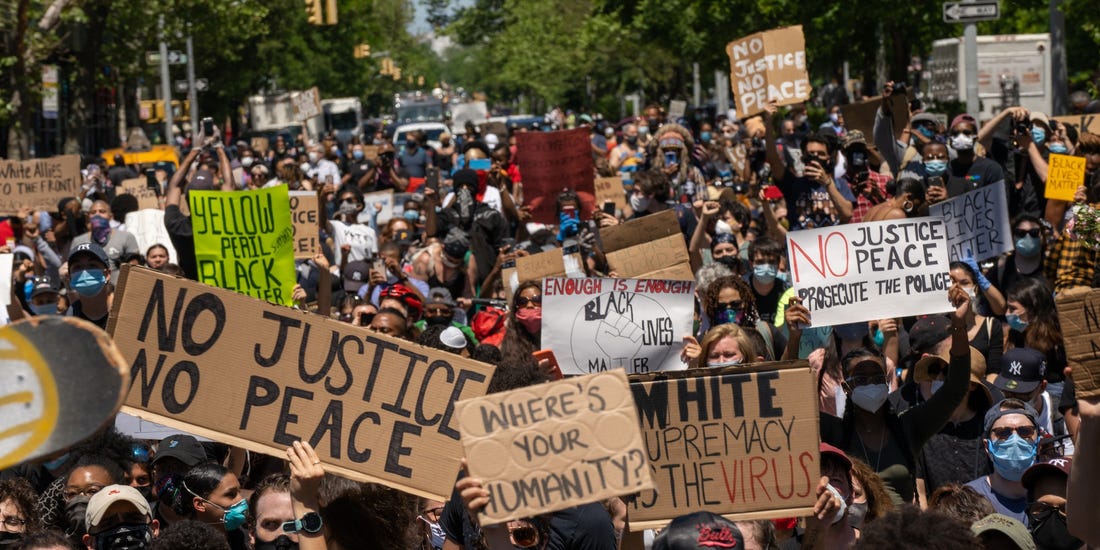 ▲
Protests throughout the U.S. continue after the murder of unarmed Black citizens in early 2020.
Google Images

▲
Protests throughout the U.S. continue after the murder of unarmed Black citizens in early 2020.
Google Images

Many may be under the impression that the suffering of Black people had stopped after the Emancipation Proclamation was passed by Abraham Lincoln in 1863, after the 13th amendment was passed in 1865, after the Civil Rights Act of 1964 was passed, after Martin Luther King Jr. walked the streets of Washington D.C. for the equal rights of his people in 1963, and after the evolution that Black people have gone through in the past.

This is because Black people have gained the right to be referred to as a whole person (and not three-fifths of one as enslaved persons were considered in the Confederate South), to go to desegregated schools and public areas and to live amongst people of all ethnicities.  By the looks of it, we are not suffering. In reality, however, the suffering never stopped; instead, it has taken a new form in 2020 and the oppressors have gained new ways to control people, some being in the form of people whose purpose is to protect and serve: the police.

The Role of a Broken System

For hundreds of years, police officers have assumed the position and roles as the authoritative figures to protect and serve the people around the world. Throughout history, the position that they have played in society has more so revolved around fear rather than protection. Not many people know that U.S. policemen first originated from slave patrols.

“Slave patrols and Night Watches, which later became modern police departments, were both designed to control the behaviors of minorities…” Victor E. Kappeler, Ph.D from Eastern Kentucky University writes. “Policing was not the only social institution enmeshed in slavery. Slavery was fully institutionalized in the American economic and legal order with laws being enacted at both the state and national divisions of government.”

Not all officers are seen as fearful or harmful to society. However, the actions that we have seen officers take into their own hands has established this new meaning behind what to “serve and protect” really means.

In 2009, the life of a California young father Oscar Grant was taken behind the gun of the police officer, Anthony Pirone. Before his death, he was punched without justification, hit in the face unprovoked, and also called the N-word. In 2012, 17-year-old Trayvon Martin was killed by a neighborhood watch patrol as he walked home from the store. His death and the acquittal of his murderer sparked the major support behind what is known today as the Black Lives Matter Movement.

In many of these cases, where young black men and women have lost their lives to police brutality, it is from the racial profiling that compels officers to give their bullets names to these people for the color of their skin. What makes matters worse is that in some of these cases, it isn’t always police officers or authoritative figures.

On February 23, Georgia resident Ahmaud Arbery was jogging in his neighborhood when two men hunted him down, and shot and killed him. The crime? He was a Black man who the two men claim was breaking into an abandoned home. The people? Civilians and not at all police officers on duty. This killing took place in broad daylight in February, and it took until May and major public outcry to arrest the alleged murderers. The spark in social media coverage is what influenced the arrest. Take that in.

What seems to be a common factor in these cases is the fact that the Black men and women who are constantly dying are not being treated as equals. There is no law that says it is a crime to be a Black person in America, but the numbers never lie. Black people are dying at an alarming rate due to police brutality, racial profiling, and subjects of racially influenced hate crimes.

“Hundreds of protesters — some of them armed with rifles — massed outside Michigan’s Capitol building Thursday to denounce the state’s stay-at-home orders,” journalist Jason Slotkin wrote in regards to protests against the pandemic shutdown. These rallies took place in Michigan where people protested to reopen the state. The majority of these people were white, and armed with rifles. This protest did not end in tear gas, flames, or attacks of pepper gas and “rubber” bullets.

O the other hand, the deaths of Ahmaud Arbery, Dreasjon Sean Reed, Breonna Taylor, and George Floyd have sparked Black Lives Matter protests across all fifty states. Protesters all over the world have even come together to march for change. Despite the powerful messages behind these protests, lives are still being lost in the midst of them.

“The protest was peaceful. Then the police shot tear gas. At least 10 canisters went off, according to The Guardian’s Julia Carrie Wong. Officers clad in riot gear ordered protesters to go home before the 8PM curfew. Then they arrested 40 people,” Zoe Schiffer writes.

People have gathered around all over the world to protest the police brutality against Black people. Yet, these are the protests that seem to end in tear gas, tears, injuries, and deaths.

Is it a blessing or is it just your privilege?

Many people are blinded by the way society has seemed to divide its people. This includes race, sexual orientation, religion, culture, and etc., but it’s the privileges that come with certain races that are ruled as “nonexistent” by many. Even in cases where white privilege has gotten white people to the top of the chain in many scenarios, people are still in denial. However, it’s hard to ignore the sight of scenarios going down a certain way based off of how that person appears to the world.

One of the most widely compared cases up for discussion is the Brock Turner case. Brock Turner, then 21, sexually assaulted an unconscious woman outside of a Stanford University Fraternity house in 2015. He was sentenced and freed from jail after serving just three months. All evidence, sources, and statements regarding his actions pointed him at the crime scene and ruled him guilty, yet he only served three months in jail. His race? He was a white male.

Now you take a case such as the Central Park Five where five young teenage boys served years in jail after being wrongfully accused of raping a white woman. Thirteen years, which at the time was almost half their lives, were spent behind bars while the real murderer roamed free. With no DNA evidence leading these young boys to the crime scene, it was easier for the authorities to pin a murder crime on five innocent Black boys.

The comparison of these two cases enrages so many people because the root of it all is simple: inconsistent and unequal use of the justice system.

Although it may seem like the justice system is where white privilege seems to prevail the most, the truth is, it prevails in every aspect of society. From the police traffic stops to the entries of some stores.

White privilege has been engraved into every system in this country, so much that it feels normal to some people to the point where it isn’t even talked about anymore, and instead people have learned to accept it. It’s hard to accept a privilege that works against you. A privilege that someone can use to incriminate you or someone that you love.

It’s okay to point out when you notice the mistreatment of an individual based on the color of their skin. Or even the leverage that white people are given because of the color of their skin. Either way it has to be talked about. The real question is, where would we get this information if it wasn’t from the stories we hear and see on the internet?

The Role of Technology

We live in a day and age where telephones and camera phones have been able to record and capture so many parts of our lives, the good and the bad. Technology has been able to transform our lives in so many ways. We have been able to capture so many milestones in history to the point where they are showcased in our museums and shown all over the world. But, through it all we have to give credit to our mobile devices for being able to capture things that we can’t see forever. We have learned to showcase these photographs through social media.

Social media has been the mass spread of information for the last two decades. We have been able to connect with friends and family, and even communicate with people all over the world. With access to social media, we have access to post whatever we want and feel, and some people use this to their advantages that lead them to their disadvantages.

The youth has been stormed with social media apps such as Twitter, Instagram, snapchat, and even TikTok. Millions of videos, pictures, and tweets are uploaded daily from people all over the world. This leaves room for opinions to get out, that not everyone agrees with.

Cancel culture has reached its all time high with the exposure of racist teens all over the media. Two teenagers were recently under criticism after they made a TikTok video on ‘how to make a black person’. This video took over all social media apps by a storm. People everywhere were outraged by the fact that anyone would make such a video considered the day and age we’re in right now, but no surprise there. The media was able to track down the teenagers’ school, and email their teachers and parents until they were expelled. This goes to show what a video means to so many people and how it can change your life.

We are taught by our parents and even our teachers to watch what is put on the internet because it can go a long way. And although social media has had its debut in the prevails of body image, mental health, and bullying it has captured so many powerful moments that have carried many movements across the nation.

We don’t realize the power that our phones have had, that have given us the ability to see what happens behind the screen. Thousands of videos are uploaded on how the police treat people, apart from what news outlets show us. We witness videos of modern day lynches, of police brutality, and acts of racism happening in 2020 being brought to light and shared on these social media sites for millions to see.

Without the spread of information, photography, and videography from social media, who would we believe. Let’s take a moment to think about the stories that we haven’t heard about because they were not recorded.