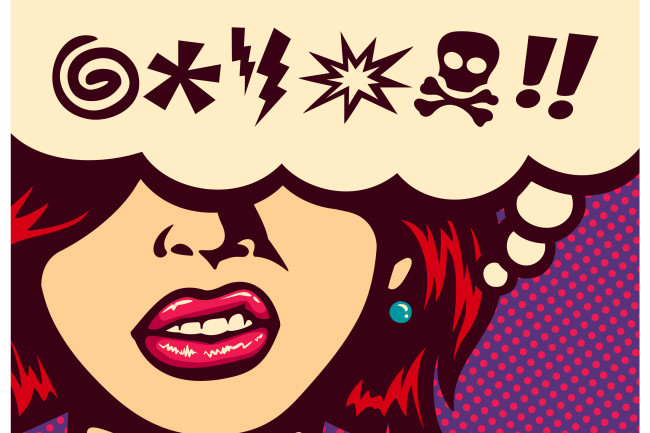 ▲
While not recommended in most of your everyday interactions, swearing proves to have its benefits.
Google Images

▲
While not recommended in most of your everyday interactions, swearing proves to have its benefits.
Google Images

Children are often taught that the use of cursing to express oneself has been attached to the stigma of being less intelligent than those who don’t curse. However, recent studies have shown that swearing can display an incredible use of language. According to a study done by a phycologist from Marist College, a link was found between how fluent an individual is and how fluent they are in swearing.

To find the link, researchers asked the people to list as many words beginning with a certain letter to measure their verbal fluency. The researcher then proceeded to ask the study subjects how many swearing words they can list. By comparing scores, they concluded that the people with the highest verbal fluency also scored the highest on fluency tests.

With this research it is suggested that swearing isn’t connected with low intelligence but rather “feature of language that an articulate speaker can use in order to communicate with maximum effectiveness.”

Swearing can at times spark our inner creativity. Some individuals who naturally possess more of a creative flair find that they can come up with very creative words in the process of swearing.

By swearing, humans not only communicate the meaning of a sentence, but also our emotional response to the meaning and our emotional reaction to something. It also allows us to express anger, disgust or pain, or indicate to someone that they need to back off, without having to resort to physical violence.

Swearing is not only connected to fluency in language but also to social bonding. When a person swears amongst a group of friends, when it’s done correctly and under the right circumstance, it may indicate that that person is real and raw. It makes the person seem open and trustworthy which allows you to appear likable and friendly.

In some circumstances where people aren’t the nicest to you and it feels like a violent outbreak is going to occur swearing allows us to get back at people who were horrible to us without having to resort to the traditional violence. When we swear in those kinds of situations we channel our anger by swearing instead, in what is seen as a healthier outlet to help release our negative emotions without physical harm.

In a research done by the U.S National Library of Medicine National Institute of Health, researchers found that people who swore while their hands were held in ice water rated the experience less painful compared to those who didn’t swear.

During the research, the researcher monitored the heart rate of the participants and found out that swearing is a natural defense mechanism that not only releases adrenaline and quickens the pulse, but also includes a natural pain relief known as stress-induced analgesia.

This is why swearing is not uncommon while pregnant women are going through childbirth.

In another research, Dr. Richard Stephens of Keele University in England discovered that people who swear are able to hold their hands in ice water for twice as long  compared to those who didn’t swear.

In an interview, Stephens explained that “across a couple of studies, we have reliably shown that swearing helps people to cope with pain, it seems to come about via an emotional response. ”

Benefits of swearing can also include increased circulation, elevated endorphin, and serotonin levels, and an overall sense of calm, control, and well-being. All of these benefits can seem intriguing if it is done in the right way, and does not become an overelaborate habit.

According to recent study, researchers found that people who curse often have higher levels of honesty than those who don’t. Researchers examined participants’ profanity use and had them do a lie scale.

It contained a series of redundant questions to determine a person’s truthfulness. The study found a positive relationship between those who cursed and their honesty levels.

Apart from the connection swearing has to a person’s honesty levels did you know that spewing out profanities during a workout may help you pump more iron. According to a research conducted in 2017 by the New York Times it was suggested that swearing could affect the outcome of your workout.

Participants were examined during bicycle and hand-grip exercises and were told to either repeat neutral words or curse words during the activities. In both trails, it was concluded that swearing helped improve performance.

With all these studies about swearing it is shown that swearing is not just about being offencive. Language is a revolutionary toolkit to communicate and swearing is a part of it.