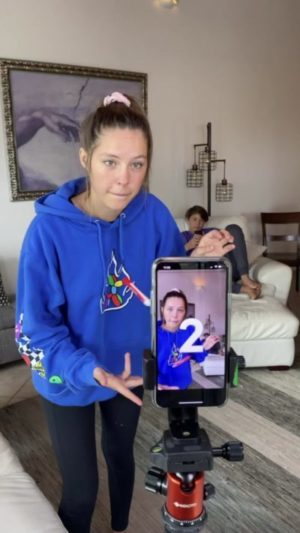 On August 6, 2020, Donald Trump signed an order on the International Emergency Economic Powers Act allowing him to regulate economic transactions in the event of a national emergency. This means that no business or person in the United States would be allowed to interact with TikTok by any means.

Upon hearing this news, many teens around the country were shocked to hear that their favorite app could possibly be shut down. TikTok is an app where people can create anything they want and express themselves, it left many people thinking, what would happen if TikTok were to actually be banned from the United States?.

Having over 2.3 billion downloads, and 100 million users in the United States, the Trump administration expressed their concerns towards the widely known app. Authorities see the app  as a national security threat, they believe the app is being used as a spying tool by Beijing. They fear that it could be leveraged to collect personal data on U.S. citizens. However, TikTok has made it clear that it stores all U.S. customer data outside China and that it does not pass it on to the Chinese government.

Many people have expressed their feelings towards Trump’s actions and feel that he is being very unreasonable.

“I think the whole situation is unnecessary,” exclaimed junior Karina Diaz. “The app has not just been a form of entertainment, but has also done a lot for this generation, such as bringing them together in times of need and starting up important conversations.”

The app has been a very huge factor in everything going on in the world right now. Because of this big media platform that is provided, many creators have been able to raise awareness on many serious issues going on in different parts of the world that some people may not even know about. Through these tiktoks, people continue to learn about what is going on in the world and could ultimately be a part of making a change.

Moreover, TikTok has been a big part of the Black Lives Matter protest because many users have used their platforms to advocate for the Black community. Most of these users broadcasted many live protests that occured after the passing of George Floyd. This has motivated so many viewers to become more involved and help fight against the cruel actions taking place.

“TikTok is to Black Lives Matter what Twitter was to the Arab Spring,” said TikTok creator Kareem Rahma in a New York Times interview. “The conversations these kids are having with each other are essential.”

Nevertheless, the Trump administration stated that the only way the ban could be lifted is if ByteDance, the company that owns TikTok, shares their app with an American company to ensure that China doesn’t have most of the control over confidential information on the U.S. This would mean that ByteDance would have to partner with an American buyer, and have that company be in control of all U.S. operations.

After many companies got rejected, Trump finally approved Oracle’s deal proposal to be named as the leading American company to work alongside ByteDance. Oracle is a multinational computer technology corporation that sells database software and technology. This deal also includes Walmart, and a $5 billion fund for U.S. education.

Although the ban has been lifted for now, users should not get too comfortable as anything can happen between the partnering companies and their deal. With that being said, many users are happy that the app is here to stay and could not imagine what life would be like without it. What would we do without the app that had a crucial part in bringing this generation together?